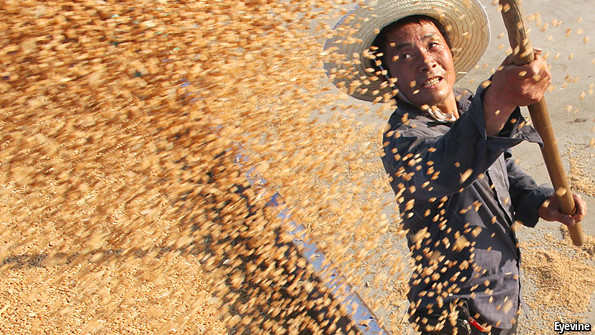 At The New Yorker, Christina Larson looks at the Chinese public’s distrust of genetically modified food, and how it has led GMO research and development to become a rare case of public opinion superseding national policy goals:

[…] To live in modern China is to worry constantly about food safety. Scandals—from libidinous, corrupt officials to rigged TV talent shows—abound in the news and on social media, but few grip the public imagination like stories of poisoned food: the milk powder, tainted with the industrial chemical melamine, that killed at least six infants and sent more than fifty thousand ill babies to the emergency room in 2008; the watermelons that, in 2011, after receiving too much growth hormone, exploded; the admission, in 2013, by Guangdong’s provincial government, that forty-four per cent of the local rice that had been tested was laced with dangerous levels of the heavy metal cadmium. The skeptical public has little faith that authorities will enforce food-safety regulations.

This mistrust makes it difficult to introduce new food technologies, even if China needs them. “If the government says that G.M.O. food is safe, Chinese people won’t readily believe it,” Sam Geall, an anthropologist at the University of Sussex who has been conducting field research recently in Beijing, told me. For the past eighteen months, Geall has been studying public opinion regarding G.M.O.s in China. The chasm of credibility and the lack of a trusted referee make it hard for the public to sift rumor from fact, he said: “This may be the clearest example where public opinion in China has likely played a role in stalling or stopping an innovation pathway that the government backs, for better or worse.”

In many areas of national planning—from rerouting and damming the Yangtze River to clearing fields for the construction of airports and railways—China’s leaders don’t give much thought to public opinion. But food is personal, tangible, and essential. In recent years, ordinary Chinese citizens have gone to great lengths to avoid foods that they believe are inadequately regulated by the government. The smuggling of milk powder is on the rise, such that British supermarkets frequented by Chinese tourists have imposed limits on how many boxes a single customer can purchase. Geall’s early research indicates that China’s most educated citizens are among those most opposed to G.M.O.s; they want choices, especially where their dinner is concerned. Not even a government as powerful as Beijing’s can force-feed a wary public. [Source]

For more on food security, food safety, and genetically modified food, including the Minister of Agriculture’s attempt to ease public concern by announcing his own regular consumption of GM food,