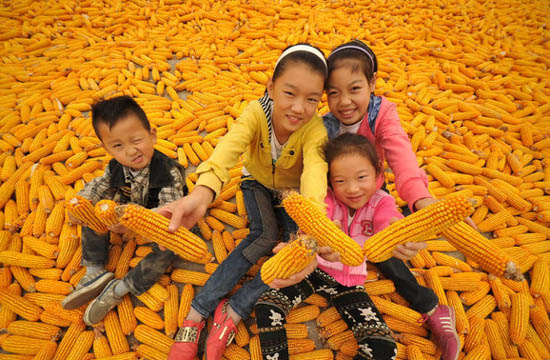 At the Los Angeles Times, Michael Meyer, author of “In Manchuria: A Village Called Wasteland and the Transformation of Rural China,” discusses China’s latest rural reforms and a shift from collective farming to large-scale corporate agribusiness.

China faces daunting farm statistics: One-fifth of the world’s population feeds off one-twelfth of the planet’s arable land. And that acreage is shrinking: In the last 30 years, an area the size of New York state has been paved over as China urbanized. An additional 8 million acres became so polluted that the government announced in late 2013 that they shouldn’t be used for agriculture.

China’s solution is to industrialize farming, as the United States did in the last century. (In 1935, America had 6.8 million mostly small farms; today it has 2.2 million, and just 9% of them produce 66% of America’s crops.) In February, when the Communist Party released its policy blueprint, the “No. 1 Central Document,” for the 12th year in a row, it focused on rural reforms. The government is promoting the consolidation of family-farmed plots into large-scale, managed enterprises. In a word: agribusinesses.

Until recently, the privatization of Chinese farms was anathema; the party came to power on a mantle of equitable distribution of land seized from manorial estates. (In the 1950s, about 800,000 landlords were executed.) Today, farmers are allotted a plot about the size of an American football field but are barred from owning it outright. Yet the government is telling them that privatizing farms is a national priority, so long as companies, not individuals, manage the land. As one elderly Wasteland farmer who has lived through six decades of economic experimentation fumed, “Someone up here,” he said, raising his arm, “is always telling us down here what to do.” In feudal times, it was landlords. Then came cadres. Now it’s managers at Eastern Fortune Rice. [Source]

At Reuters, meanwhile, Niu Shuping and David Stanway report that officials are promising to emphasize food safety and sustainability over bumper crops:

“In our current grains policy, one of the most important ideas is to speed up the transition in the way we boost grain output,” said Han Jun, deputy director of the Office of Central Rural Work Leading Group, the country’s top decision maker on rural policy.

“In the past we were exhausting our resources and environment in pursuit of yield, and now we have to focus equally on quantity, quality and efficiency and particularly the quality of grain output growth, environmental protection and sustainable development,” Han told the China Development Forum on Saturday.

He said China had recently published its sustainable development plan for agriculture, which will cap water use as well as reduce the use of chemical fertilizer and pesticides in its agriculture production.

China’s huge grain reserves should help ease the transition and reduce the risk of food shortages, said Han. His speech was carried on www.sina.com. [Source]

Read more on agriculture in China and issues of food safety and security via CDT.