In order to build up cultural services for its farmers, Yunnan Province has publicized a regulation that “on average each farmer [should read] one book annually, [watch] one drama per quarter and [participate] in one cultural activity twice a month by 2010.” The provincial government plans to hand out small 0.5 yuan subsidies for the cultural plan. From Chen Chenchen of the Global Times:

The Yunnan provincial government recently publicized a regulation to invest 18 million yuan ($2.6 million) to improve a public cultural service system in rural areas. Specifically, the money is to ensure that on average each farmer reads one book annually, watches one drama per quarter and participates in one cultural activity twice a month by 2010.

People in metropolitan areas may be hard pressed to imagine what a poor cultural life people have in rural places. Critics who understand rural China have lampooned the goal of “one book per capita per year” as another “Great Leap Forward Movement,” since even this moderate goal is too great a luxury for people there and can hardly be realized.

Ninety percent of China’s illiterate population lives in rural areas, making up one fifth of the rural population. Even those who have had some education rarely read. Men play cards, women get together to chat, and kids eagerly scribble in their textbooks. Simply providing them books will not guarantee them reading.

By one writer’s calculations, the addition of the province’s 0.5 yuan cultural subsidy would, at optimum conditions, bring the total amount of cultural subsidies for farmers up to 10 yuan per person. Wang Yuchu writes his opinion piece in People.com.cn: 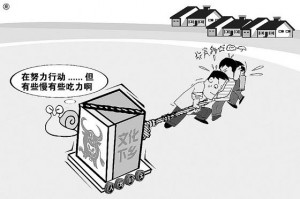 On May 2nd, I went into a Xinhua Bookstore and glanced at the books on the shelves. Few books were under 10 yuan. Therefore, it will be difficult for farmers to realize the one book a year average estimate with this 10 yuan dependence. Seeing this, how can we speak of other cultural activities? Of course, in the course of this plan, some are thinking about “using one constituent to represent the whole” (“以点带面”) and using the collective funds to make one “big event.” The entire year’s funds would go towards a few test site villages. Therefore, it would seem possible for farmers to read a book in a year, see an opera every quarter year, and participate in cultural activities bimonthly. However, this kind of thing only fulfills the cultural needs of a minority of farmers. It doesn’t even begin to speak to the basic cultural rights and privileges that farmers as a group should enjoy.

The reasoning is not all that complicated. For example, let farmers read one book a year on average — [but the issues of] what book, how to read, and what is the application are not questions that can be controlled. Many farmers have not received education and can only recognize a limited amount of characters. How they will read will likely be a problem. Further, there are those who have received a high school education. However, after starting agricultural production, they’ve likely put aside their books and may find it difficult to pick up particular interest in them. […] In China’s villages, most young people have left to find work, leaving behind the elderly and children. Don’t expect them to show huge results.

Word of the Week: (Death by) Hide-and-Seek