Behind the Scenes: Tank Man of Tiananmen As the June 4th Tiananmen demonstrations approaches, several stories have reappeared about the Tank Man. The New York Times documents and reviews the photos taken of the “Tank Man” that have become iconic outside of China:

Few images are more recognizable or more evocative. Known simply as “tank man,” it is one of the most famous photographs in recent history. 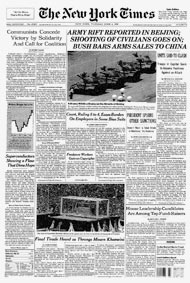 Twenty years ago, on June 5, 1989, following weeks of massive protests in Beijing, resulting in the deaths of hundreds, a lone man stepped in front of a column of tanks rumbling past Tiananmen Square. The moment instantly became a symbol of the protests as well as a symbol against oppression worldwide — an anonymous act of defiance seared into our collective consciousnesses.

“It all started with a man in a white shirt who walked into the street and raised his right hand no higher than a New Yorker hailing a taxi,” James Barron wrote the following day in The New York Times. The picture appeared on the front page of this newspaper as well as in countless other publications around the world.

To this day, the identity and fate of the man in the picture remains unclear. A riveting documentary, “The Tank Man,” by PBS Frontline in 2006 explored his fate. Yet still no one knows for certain who he is or what exactly happened to him. The image is largely blocked on the Internet in China. Despite its iconic status and historical significance elsewhere, most young people there do not recognize the photograph.

See also Jeff Kisseloff’s blog on the Nation and Jane Macartney’s piece from the Times on the Tank Man.