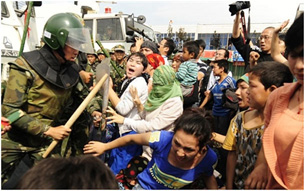 From the Radio Free Asia:

Meanwhile, a Han Chinese Web publisher who declined to be named said his privately owned news Web site had mostly engaged in self-censorship around the politically sensitive ethnic violence in the XUAR, without specific guidance from the authorities about exactly what material to remove.

“They just tell us that anything concerning opposition to the government won’t be tolerated … What happens if you don’t take them off is that they will turn off the site at the server at the service center,” he said.

“This has happened to me many times. They tell me that I should take some time to remove the offending material, and when I’m done they will reconnect my site again. If you don’t do a good job of removing this material, they just pull the plug on you.”

Chinese officials reacted with unprecedented speed to the July 5 riots, which Uyghurs say were sparked by an armed crackdown on unarmed Uyghur protesters calling for an investigation into a concerted attack by Han Chinese on Uyghurs at the Xuri toy factory in Shaoguan, Guangdong province, the week before.