Qin Gang: “Stand Your Ground Firmly. Your Bottom Decides Where Your Brain Is” 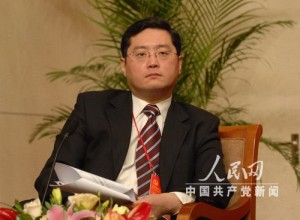 New quotes from Chinese Ministry of Foreign Affairs spokesman Qin Gang to add to the collection. From the July 27, 2009 Beijing Daily, via netease.cn.com, translated by CDT:

Yesterday morning, it was very crowded and festive at the gates of the Ministry of Foreign Affairs. More than 150 ordinary people from different walks of life came here with curiosity and excitement to participate in the public day activities of the Ministry of Foreign Affairs right before the sixtieth anniversary of the PRC and the ministry itself.

Before everyone left, Foreign Spokesman Qin Gang let everyone act as journalists to ask him questions. Professor of Beijing United University Chen Delin got the mic first: “What principles do you follow when you answer questions from Chinese and foreign reporters?”

“Stand your ground firmly. Your bottom decides where your brain is,” (“站稳立场 屁股决定脑袋”) Qin Gang answered with humor. He said, a spokesman first must be loyal to the motherland and people, and second he needs to grasp policies comprehensively and with familiarity. With these two skills, there are “no difficult questions that cannot be answered.”

Update: more quotes of Qin Gang from the Under the Jacaranda Tree blog.