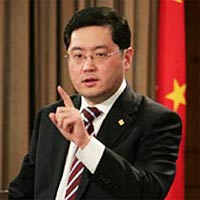 From Under the Jacaranda Tree blog:

Qin Gang is the public face of China. Everybody reckons he is a significant improvement from his predecessor Jiang Yu, whose looks and mannerism often call to mind the good old days when Chairman Mao’s concubine Madam Jiang Qing ruled the world. Qin Gang, on the contrary, is a split image of Chairman President Hu Jintao, a new generation of Chinese leadership whose presence acts as a constant reminder of how and why China shakes the world.

Many people are not aware that Qin Gang has both the wit and the superb communication skills to match his good looks. I’m not kidding. The following incidents will help illustrate my point:

On 9 June 2009, a BBC reporter interrogated Qin Gang about the justification for the compulsory installation of the Green Dam Youth Escort filtering software. Qin Gang replied:

A month later on 2 July 2009, another BBC reporter asked, “Qin Gang, do you have children?” Qin Gang nodded affirmatively. The BBC reporter continued, “I ask you because a few weeks ago, you asked my colleague whether he had children when he asked a question about Green Dam Youth Escort. And you said that the Green Dam Youth Escort is essential to protect the children of China, and my colleague would of course understand that if he had children. So now that the government has delayed the installation of this software, are the children of China, perhaps your children less well protected?”

To this Qin Gang replied:

Everything I need to say on the subject, I have already said, so I have nothing to add to the matter. Okay. Next question.

我想提醒你的是，这里是外交部的新闻发布厅，不是讨论同性恋问题的场所。
What I’d like to remind you is this.This is the Ministry of Foreign Affairs press conference and not a forum for the discussion of gay issues.
— Qin Gang (秦刚), Foreign Ministry spokesman

In response to a question by a journalist on why the word “homosexuality” was among the list of filtered words in the Green Dam censorship software even though China has no laws against homosexuality. 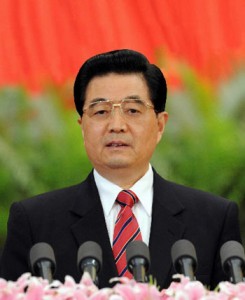 This is an interference in China’s judicial sovereignty.
— Qin Gang on comments made by Australian Prime Minister Kevin Rudd and others calling for Beijing to be transparent in dealing with the recent detention of four employees of mining giant Rio Tinto on espionage charges / July 17, 2009

The statement from the United States ignores the facts and makes groundless accusations against the Chinese government. We express our strong dissatisfaction and resolute opposition. We urge the United States to forsake its prejudices, correct its erroneous ways and avoid obstructing and damaging China-U.S. relations.
— Qin Gang on Hillary Clinton’s remarks / June 04, 2009

The following excerpt is from remarks by Chinese Ministry of Foreign Affairs spokesperson Qin Gang (秦刚) during a press conference on March 31, 2009, and is being widely commented on by Chinese netizens:

Question: YouTube was blocked at one point last week and was available again from China, and now it seems to be blocked again. There are speculations that it links to the release of video from the “Tibetan Government in Exile”. Do you have any comment on that? Is there any particular offensive material on YouTube right now that causes it to be blocked again?

Update: Qin Gang: “Stand Your Ground Firmly. Your Bottom Decides Where Your Brain Is”