Chinese police are holding 11 people who planned to attend today’s trial of an activist who investigated the death of schoolchildren in last year’s Sichuan earthquake, a high-profile artist and government critic among the detainees said.

Ai Weiwei, a contemporary artist who designed the Olympics Bird’s Nest stadium, said he and six others were detained at their hotel, while four others were taken to a police station. Police punched him on the jaw and roughed up another man, he said.

They were in Chengdu to attend this morning’s trial of Tan Zuoren, a Sichuan activist charged with subversion, apparently in connection to his inquiry into how many children died when school buildings collapsed due to the earthquake and essays he wrote about 1989’s student-led demonstrations in Tiananmen Square.

Ai Weiwei took the following photo (via Wen Yunchao), apparently in an elevator as he was being taken away from police. As the Time China blog points out, “It’s impressively composed, given the circumstances.” 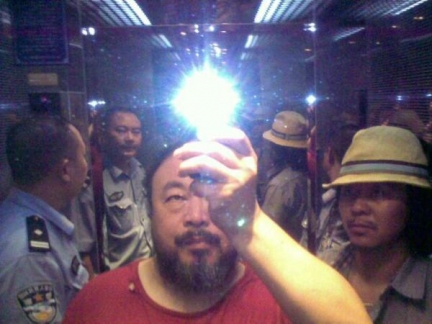 Also, the following are examples of Chinese tweets making the rounds of Twitter about the trial (thanks to the translator who prefers anonymity):

From the Chinese Tweetersphere on the Tan Zuoren Trial at 6 PM Chengdu time:

* Mrs. Tan and her little girl just came out, quiet but strong, and hall erupted in applause that got louder and louder. She thanked the crowd.
* All that clapping was just a show. After all, the whole group was made up of Tan’s supporters.
* The court didn’t allow Lawyer Hu to hug Mr. Tan when it ended.
* What made people angry and disappointed: the police took Mr. Tan out by a different way so he couldn’t see that so many people had come to support him.
* If Xu Zhiyong and Tan Zuoren go to jail, then I will be ashamed at not being in jail. I’ll apply for a place inside for myself.
* Because of the Tan Zuoren trial, the government illegally restricted the freedom of Ai Weiwei and his group of ten people. Zeng Zihou, Ran Yunfei, Chen Yunfei, Xie Yihui, Yang Yu.
* To call them animals is an insult to animals. I wasn’t there, but I think the applause for Mrs. Tan must have frightened those beasts in human clothing in the courtroom.
* The Tan Zuoren case has concluded, the lawyer expressed his disappointment: The trial of Sichuan rights protector Tan Zuoren for “incitement to overturn state power” has concluded. The defense lawyer was disappointed at the court hearing.
* Pu Zhiqiang: The whole process was a farce. Wang Qinghua: Tan Zuoren refused to admit guilt.
* When the trial started, the crowd was moved out of the courthouse. People walked around and talked. According to Mrs. Tan and her daughter, the court didn’t allow Mr. Tan to say anything, and didn’t let the lawyer speak either. Whenever he said a few words, the judge interrupted him and ordered the court to move along to the next topic. Mr. Tan’s statement lasted four minutes before it was interrupted.
* It seems that Mrs. Tan said she was ejected from the trial because of an argument. So the only one who heard the entire trial was her little girl.
* Lawyer Pu and Lawyer Xia confirmed that what Mrs. Tan said was true. Their statements were always interrupted for no reason.

Update: See an article from the New York Times:

Mr. Ai said in a telephone interview on Wednesday that he had arrived in Chengdu the previous day to testify on behalf of Mr. Tan but that the judge did not allow him to. He said that he had planned to appear at court anyway but that he and 10 or 11 of his volunteers were prevented from doing so by the officers who barged into their hotel rooms and kept them under watch.

“They left a couple of hours later, but some stayed in the hallway and some in the lobby to keep an eye on us, to make sure we failed to attend the trial,” Mr. Ai said from the hotel.

[…] The court did not allow anyone to testify on behalf of Mr. Tan at the trial on Wednesday, said Pu Zhiqiang, Mr. Tan’s lawyer.

He said he would submit a written defense statement to the court by Monday.

“However, unless this is an extremely rare case, Tan will be found guilty,” he said.