Yeeyan, the online volunteer English-Chinese translation service, has been shut down. The Guardian, which partnered with Yeeyan last year to publish selected Guardian stories, reports:

Yeeyan’s main website, which also publishes other material translated by its members, has also been shut down. No reason has been given. The Guardian is seeking an explanation from the Chinese government about why the site was shut, and when it will be allowed to resume publication.

Alan Rusbridger, editor in chief of Guardian News & Media, said: “This is a very disconcerting development. Yeeyan is a wonderful community of mostly volunteer translators who give Chinese web users access to a wide range of content published outside China, including Guardian reporting and commentary.

“We hope this move does not represent an attempt to suppress independent-minded journalism, and that the Chinese authorities can reassure us that Yeeyan and the Guardian will be allowed to resume publication.”

Yeeyan is the largest open translation community in China. As of June this year, it had more than 90,000 registered users, including about 5,000 community translators who have published nearly 30,000 translations on the site.

Below is a screenshot of Yeeyan’s open letter to users currently displayed on the site. The message says, “Because some of the articles on our site deviated from or violated relevant regulations, Yeeyan needs to temporarily shut down its server and adjust the relevant content”: 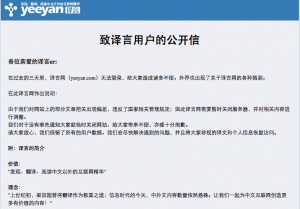