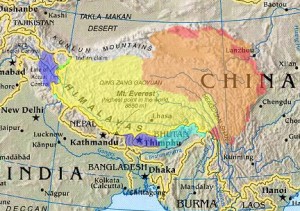 The state-run China Tibet Information Centre has said that the Dalai Lama’s recent statement describing himself as “son of India” show he has become subservient to his “Indian masters” while trying to deny his Chinese citizenship… “In fact, another reason why the Tibetan calls himself a “son of India” is that he intends to deny his Chinese citizenship,” the Centre said in an article pasted on its web site.

Chinese leaders have been worried that the next incarnation of the Dalai Lama will take place outside China and far from its control. But this is the first time that the government has betrayed its worries that the Tibetan leader might actually change his citizenship.

The article pointed out that an Indian businessman, Bhupendra Kumar Modi, had claimed that the Dalai Lama would try to obtain Indian nationality if the conditions were right… The article says two earlier Dalai Lamas, the 7th and 8th, were approved by Chinese emperors. The allusion is meant to remind him that the government at the center will be the final decision maker when it comes to approving the next incarnation. Beijing issued rules two years back saying that all Living Buddhas including the Dalai Lama will need to be approved by it.

In related news, Hu Jintao has urged for a change in Tibetan policy:

Chinese president Hu Jintao has said his government was grappling with a set of “special contradiction” between people of all ethnic groups and the separatist forces led by the “Dalai clique”. He vowed to crack down on all forms of separatist activity in Tibet.

Hu has also promised to take substantial measures to ensure “normal order” of Tibetan Buddhism in Tibet. Tibetans must be made to realize that they are a part of the Chinese nation, he said. He also promised to “improve” the Communist Party’s attitude towards minorities and the Tibetan region.

These statements made at a conference of officials amounts to admitting that the party’s attitude toward Tibet were not entirely correct something it has not done earlier. They come soon after Beijing replaced the governor of Tibet.

In a rare personal attack on the Dalai Lama, Chinese President Hu Jintao has accused him of engaging in “Tibet independence” activities and “sabotaging” social stability in the strategic Himalayan region… The awareness of being part of the Chinese nation and being law-abiding citizens must be constantly enhanced among cadre and the masses in Tibet, the official Xinhua news agency citied Hu as saying at a meeting of senior Chinese leaders here earlier in the week.