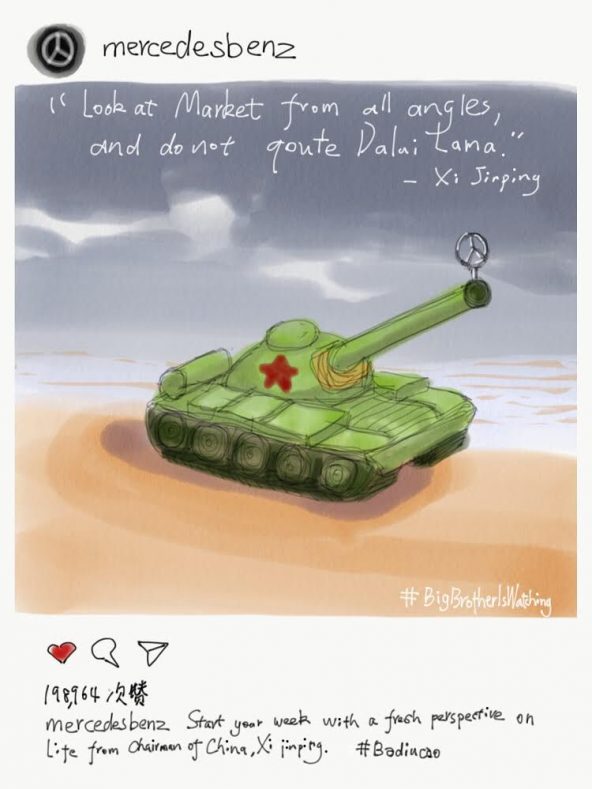 Last month, German carmaker Daimler repeatedly apologized for hurting Chinese feelings, disavowing any "support, assistance, aid or help to anyone who intentionally subverts or attempts to subvert China’s sovereignty and territorial integrity." Its offense was to include a quote from the Dalai Lama in an Instagram post from a Mercedes brand account. The uproar over the post followed similar perceived online affronts to China’s borders by hotel chain Marriott, fast fashion retailer Zara, and Delta Air Lines. At The Wall Street Journal this week, the Hoover Institution and Stanford University’s Michael Auslin highlights these cases as well as the increasing demands placed on foreign firms’ operations within China, such as the ongoing transfer of online service management from Apple and others to local companies.

[Daimler’s] public humiliation has prompted many companies to ask: How much is it worth to stay in China’s markets?

Gone are the days when China bided its time, as counseled by Deng Xiaoping. In exchange for continued access to Chinese markets, Beijing increasingly expects Western companies to engage in self-censorship, accept government control over information, and even punish their own workers for offending China.

[…] Some Western corporate leaders argue that running away from China makes no sense. “We believe in engaging with governments even when we disagree,” Apple CEO Tim Cook said last year. But engagement is a two-way street, and Beijing has shown no willingness to accommodate. Instead it has become more intrusive.

China’s behavior makes it necessary for Western companies to ask whether the cost of doing business can be too high. Does the profit motive override any responsibility to defend the values of the societies from which they emerged? If only to draw the line against further demands, companies should be reflexively opposed to Beijing’s overreach. Otherwise they should expect the cost of doing business in China to continue to rise. [Source]

Apple has come under particular scrutiny for various aspects of its Chinese operations, including long-running concerns about conditions in its sprawling Chinese supply chain, the removal of VPN, news, and other apps from its Chinese App Store, Cook’s participation in China’s online-control-showcasing World Internet Conference, and now the iCloud management handover. In a January magazine article translated earlier this month at Global Voices, Lo Shih-hung of Taiwan’s National Chung Cheng University expressed disappointment at Apple’s acquiescence in the latter case:

The US-based global tech giant Apple Inc. is set to hand over the operation of its iCloud data center in mainland China to a local corporation called Guizhou-Cloud Big Data (GCBD) by February 28, 2018. When this transition happens, the local company will become responsible for handling the legal and financial relationship between Apple and China’s iCloud users. After the transition takes place, the role of Apple will restricted to an investment of US one billion dollars, for the construction of a data center in Guiyang, and for providing technical support to the center, in the interest of preserving data security.

[…] Apple Inc. and Tim Cook, who had once stayed firm against the US government, suddenly have become soft in front of Chinese government. Faced with the unreasonable demand put forward by the Chinese authorities, Apple has not demonstrated a will to resist. On the contrary, it is giving people the impression that it will do whatever needed to please the authorities.

[…] As an Apple fans, I lament the fact that Apple has become a key multinational corporation offering its support to the Chinese Communist Party’s engineering of a “Cloud Dictatorship”. It serves as a very bad role model: Now Apple that has kowtowed to the CCP, how long will other tech companies like Facebook, Google and Amazon be able to resist the pressure? [Source]

Meanwhile, foreign corporations like Daimler are not along in facing anger over Chinese sensitivities on Instagram, despite the block on access to the service from within China. The BBC reports that Chinese model Liu Wen faced a backlash after a new year greeting to followers:

Liu used the phrase "Happy Lunar New Year", rather than "Chinese New Year", prompting some Chinese social media users to accuse her of neglecting her heritage.

[…] The phrase "Lunar New Year" is often used instead of "Chinese New Year" because the festival, which is determined by the lunar calendar, is celebrated in China but also in Taiwan, South Korea, Vietnam, Singapore, and other parts of Southeast Asia.

[…] However, her account was bombarded with thousands of messages from nationalistic social media users who accused her of pandering to other Asian countries.

It's the fifth day of the Lunar New Year and the China Railway Corporation says that around 9-point-5 million train trips were taken on Monday, up by half a million compared with the day before. (Photo:VCG) https://t.co/hUPf7ZG3K3 pic.twitter.com/Q1j7nDriM9