An installation by Chinese artist Ko Siu Lan satirizing one of Sarkozy’s political campaigns has been removed from display: 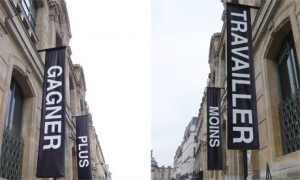 An installation of four banners by the Chinese artist Ko Siu Lan on the exterior of the Beaux-Arts building in central Paris featured the words “earn”, “less”, “work” and “more” as a play on Sarkozy’s phrase “Work more to earn more”.

The now notorious slogan was used by the president when he ran for election in 2007. In a country reeling from recession, it has since become a symbol of what critics say are his rightwing agenda’s failures.

Sources inside the Beaux-Arts indicated that the work had provoked complaints from the ministry of education because of its politically sensitive nature… Ko, a 32-year-old artist who spent two years in Paris before returning to Beijing where she now lives, said she was shocked and saddened by the ban. “I come from China and we know what to expect there but I would not have expected this kind of brutal censorship in France,” she said.

There was no indication that criticism of the work had come from the Elysée palace. A statement from the Beaux-Arts said the work had been removed because its “explicitly political” message could violate “public service neutrality”.

Three Hong Kong Booksellers To Be Released on Bail