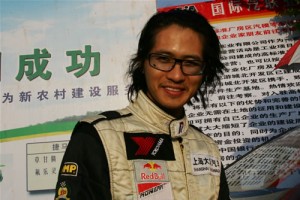 This is my second time in Xiamen. The weather here is great. No wonder people like to go outside and stroll. Hmmm … I just heard Teacher Deng spoke about certain issues on nationalism. I was reminded of a couple of sayings which I came across them previously. They are other people’s words, not mine. The first saying is, “Nationalism is the last refuge of scoundrels.” The second saying is, “True patriotism is to protect this country so that it will not suffer any harm.”

For today’s talk, I have brought along a written speech in order to constrain myself. Mainly, I don’t want you to suffer any harm because I may stray all over the place. Let me begin.

Dear leaders, dear teachers, dear students, how are you doing?

Do you know why China cannot become a grand cultural nation? It is because most of the time when we speak, we say “Dear leaders” first and those leaders are uncultured. Not only that, for they are also afraid of culture, they censor culture and they control culture. So how can such a nation become a grand cultural nation? Dear leaders, what do you say? 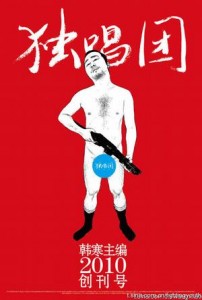 Actually, China has tremendous potential of becoming a grand cultural nation. Let me tell you a story. I am the chief editor of a magazine which has yet to publish. The Constitution states that every citizen has the freedom to publish, but the law also says that the leaders has the freedom not to let you publish. This magazine has run into some problems during the review process. There is a cartoon drawing. In it, there is a man without clothes — of course, this is unacceptable because the law says that we cannot exhibit the private parts in a publicly available magazine. I agree with that and I don’t have a problem with it. Therefore, I intentionally created an extra-large magazine logo that was placed over the illegal spot of the cartoon. But unexpectedly, the publisher and the censor told us that this was unacceptable too — when you cover up the middle part of a person, you are referring to the “Party Central” (note: “party” is a homonym for “block/shield” and “central” is “middle”). My reaction was like yours — I was awed and shocked. I thought to myself, “Buddy, it would be so wonderful if you could put your awe-inspiring imagination into literary creation instead of literary censorship!”