China’s Other Billion: Dispatch from the Earthquake Zone (Part 2)

This marks the second installment in a series of posts by journalist Rachel Beitarie*, who will be sharing with us dispatches from her journey across rural China. In this post, Rachel visits Beichuan County, Sichuan and meets a survivor of the devastating 2008 earthquake. (Read Chapter One of the travelogue here.)

All around the countryside of Beichuan County, there are signs of massive reconstruction. People are busy: building their own houses, working as hired hands in neighbors’ half finished new homes, refurnishing or earning some extra cash in road construction. Sights on the road are telling of the magnitude of the work being done here: motorways rebuilt, dams repaired, the electric grid being reinstalled, schools and hospitals and government offices – usually the first to be reconstructed and the most ostentatious – and homes, everywhere, solid and spacious by rural standards.

In the little township of Chunshui (春水), a weekly market is in full swing, offering, apart from the usual selection of vegetables, geese and chickens, piles of cheap household necessities. At the edge of town temporary houses still stand, now deserted and partly covered with an overgrowth of weeds, as former residents are moving into new permanent homes. The work is not yet done: The road from Anchang (安昌) is still barely passable and at the new school electricians and craftsmen work feverishly to prepare everything in time for the start of the school year in September. The overall atmosphere is that of optimism and hope for a fresh start. Onward along the road, everywhere villages are seen, all with newly constructed two story houses surrounded by corn and rice fields at the edge of forested green hills. Only here and there the road shows signs of the terrible upheaval in boulders thrown at the edge of the Jin river, or a bare mountainside where rolling earth and crushing rocks buried a whole village once, not three years ago. 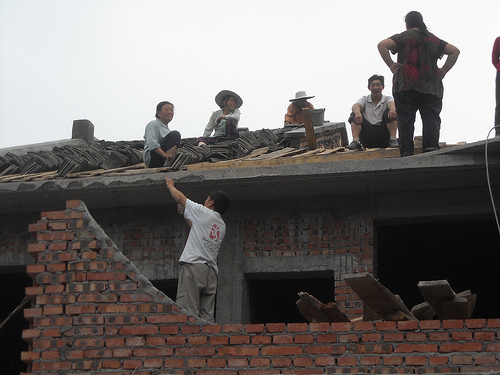 Up the road on the way to the ruined city of Beichuan, now a memorial site, lies the small one street townlet of Tongkou（通口镇）, the smallest and poorest of the towns in Beichuan country – really little more than a village in the shadow of a local holy Daoist mountain. Here, too, people are at work: Some houses along the only street are already occupied while other families are still hard at work on their new homes. One of them is Li Dafen, 54, violently mixing cement for plastering on recently erected walls. She is among the last households in the village to be moving in, living in the meantime in the dark and exposed basement of her uncompleted apartment.

Born in an even smaller and very remote village in the Beichuan area, Li attended only two years of elementary school. She came to Tongkou as a young bride to live in her husband’s house more than 30 years ago and had her two children here. 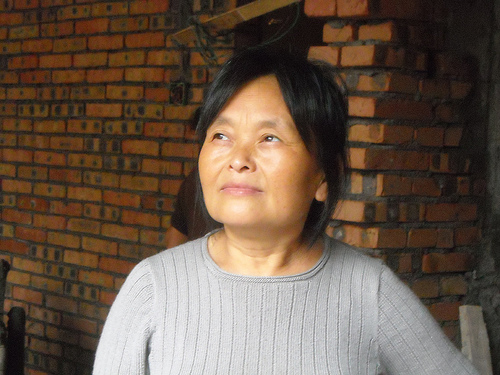 Li Dafen in her home

Even before the quake tore down her home, Li was no stranger to calamity. Her daughter died some eight years ago from internal bleeding early in her pregnancy. Less than two years later, her husband died suddenly of heart failure. (A new hospital was built in town with donations from Shandong province, and seems to be quite active though not as well equipped as propaganda would have us believe. It might help make tragedies like Li’s less common in the future).

She was left to support her remaining son by herself, which she did by going to “da gong” – getting odd jobs in a series of eastern cities. News of the earthquake caught her cleaning hotel rooms in Nanjing, and she rushed home only to find it gone, utterly destroyed following the quake and floods from a “quake lake”. Fortunately her son, now twenty, was in a nearby town at the time and was not hurt. He now lives with her in the basement when not looking for a job in town. Late last year, Li went east once more, to Beijing, again working to earn money for the renovation: She says she got 29,000 RMB in compensation, to which the government added the laying of foundations for all the new houses in Tongkou – now built according to a master plan and supposedly quake resistant. Walls, ceiling, roof, flooring, plumbing and installation of doors and windows are left for everyone to do according to their own design and means. Li’s means are meager, but she nevertheless has grand plans for the place:

“People are nice enough here but they don’t help each other much. They all have their own worries and cares. People suggested that I’ll leave, with my husband no longer around and my son not wanting to live in such a small place. My family in the village suggested that I’ll move in with them, or that I’ll go east for good, but I want to rebuild my home. This is all I had left after their deaths and this I want back. This is my home – If I leave I’ll never have another one.”

And so she stays, and is quite optimistic that her home will be finished in two months or so. “You have to come here again next year and see the house,” she says. She might not be here next year though: after building and furnishing the house, the modest compensation fund will be all but spent. She then plans to go “da gong” again.