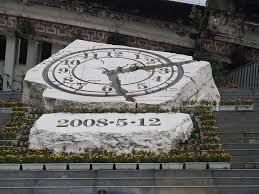 On May 12, 2008, a devastating 7.9-magnitude earthquake hit Wenchuan, Sichuan and the surrounding mountainous region, killing more than 70,000 and leaving five million homeless. A disproportionate number of those killed were children whose schools collapsed around them. As the 10th anniversary approaches, the government has launched a “Thanksgiving Day” campaign focusing on official rescue and recovery efforts, while many of the families have not received compensation or a full accounting of why so many schools were vulnerable. Tiffany May reports for The New York Times:

The heavy-handed focus on gratitude drew an overwhelming backlash from Chinese internet users who responded to Toutiao’s post on Weibo, a microblogging site.

“Everyone knows that the earthquake killed tens of thousands of people on that day, and yet you call it ‘Thanksgiving Day,’” a Weibo user said. “What do we give thanks for?”

“Can’t it be called ‘Memorial Day?’” another user asked. “Gratitude at the tip of the tongue is the most hypocritical way of giving thanks.”

Others suggested alternative names for the anniversary: “Day of the Earthquake Victims,” “Day of Suffering” and even “Day of Shame.” [Source]

The Weibo users’ responses recall a similar phrase, “tearfully urge,” which had been used sarcastically by netizens after writer Yu Qiuyu publicly called on Wenchuan parents to refrain from protesting against the shoddy construction of schools. In an interview with CDT, historian Jeremy Brown discussed patterns in government response to accidents and natural disasters:

There’s no incentive to be tender and compassionate toward accident victims. The incentive is to keep the compensation down, as low as you can, you keep people from protesting, you keep them from linking up and organizing, and if you successfully do that, then that’s “good handling” of an accident. The word “handling”, chǔlǐ 处理, is what is done after an accident …. It’s a stand-in for “make it go away,” basically. [Source]

In the South China Morning Post, Mimi Lau recounts how parents’ efforts at justice and closure have been met with official silence and sometimes intimidation:

Instead of answers, the parents’ persistent petitions over the past 10 years have brought them round-the-clock surveillance, police intimidation and even detention.

Civil rights activist Tan Zuoren said that to outsiders, the quake anniversary was the only time to remember what happened in Sichuan a decade ago. But the parents who were robbed of their children relive the trauma of May 12 every day.

“Why won’t the parents give up fighting? They press on not just to meet an emotional need, but also because they simply have to see justice served,” Tan, 64, said. “They are not after financial compensation. They simply want an official apology.”

[…] “We can’t give up or there will be nothing left but despair. Achievement comes from accumulated progress, even at its tiniest. This is about basic morality and the human conscience,” he said.

“What we are doing now has nothing to do with state subversion. What is real subversion is [the government] politicising everything rather than upholding social and judicial justice and equality.” [Source]

Survivors have had to sue the government to receive promised compensation, and allegations of mishandling of relief funds are rampant, according to a report from RFA, which also notes that the area has been urbanized in the recovery, benefiting some residents:

But campaigners say questions remain over corruption allegations and the misappropriation of relief funds by local officials, and that many of the hardest-hit victims have been forced to relocate out of the disaster zone, removing them from official figures.

Local authorities have responded to public grief and anger by placing many bereaved parents and campaigners for compensation under close surveillance or house arrest ahead of the anniversary, quake parents told RFA last week.

“Security is pretty tight right now, because this is a sensitive time,” campaigner Zhao Yi said on Friday.

“There has been no reporting [of our complaints], under the government’s propaganda and public relations program. We’re not allowed to bring up the quake or the suffering we went through back then.”

In 2008, an outpouring of support and assistance for earthquake victims from citizens throughout China shifted both public and governmental attitudes about who can and should help after a disaster. Yet after initial encouragement of such volunteering, the government began to crack down on independent efforts. Tan Zuoren, quoted in the SCMP article above,  had led an investigation into the condition of the schools that fell, after which he was sentenced to five years in prison on charges of “inciting subversion of state power.” He was released in March 2014. Artist and activist Ai Weiwei also launched a campaign to document the names of everyone killed. He and his volunteers were repeatedly harassed and his blog was censored. When Ai traveled to Chengdu to attend the trial of Tan Zuoren in August 2009, he was beaten up by security forces. Huang Qi, a Chengdu-based activist who assisted Tan’s investigation, later spent three years in jail. He is currently in jail again on separate charges awaiting trial, and supporters fear for his health in prison.

But through social media and online organizing, many Chinese citizens were able to travel to the quake zone, bring supplies, and provide support for survivors. As The Economist reports, the earthquake relief efforts marked a turning point for civil society in China:

[…] Ms Zhang, the social scientist, says the earthquake did result in a change of attitude by the government towards civilian involvement in disaster relief. “This event provided a model for how social forces could be put to use to respond to a big crisis,” she says. At the time, officials had no guidelines for working with civil society. The flood of volunteers caused congestion and compounded difficulties with feeding and sheltering everyone. But NGOs and the government soon established trust—a spirit often lacking in the party’s dealings with organisations that it does not control. When another big quake struck Sichuan in 2013, she says, the government was more prepared. “They said, ‘OK, we can put out the money and you can do the work.’”

The new model involves leaving the heavy work of rebuilding cities and roads to the government but creating space for civil society in areas such as the counselling of bereaved families. After the more recent earthquake, NGOs helped to resolve conflicts that erupted during the relocation of survivors of destroyed villages. In the past few days, a local group in Dujiangyan has been raising funds for quake victims with permanent disabilities. Ms Zhang says NGOs have been particularly helpful in the rebuilding of shattered societies. [Source]

But in an essay for The New York Review of Books, Ian Johnson points out that while allowing the public to contribute in times of disaster, the government is still sure to assert its control:

In China, the state’s presence is overwhelming—and often dictatorial. It locked up Tan Zuoren and beat up Ai Weiwei. It closed down the Chinese journalists’ trying to report on corruption. It bulldozed the Qiangs’ culture and means to turn them into minstrels for Chinese tourists. And yet, from the state’s perspective, these are perhaps regrettable side-effects of a larger good: its ability to rule.

This is what the political theorist Richard Löwenthal called a “development dictatorship”: it develops, therefore it is. It has impoverished mountain people and so, while mouthing pieties about participation and sending out teams of academics to conduct field surveys, it builds highways and hotels up into the mountains to rescue them from their own culture and history.

As for the do-gooders in Chengdu, the authorities understand that people need something to believe in—after all, in the past, people actually believed in Communism, too. So they pass NGO and charity laws that allow these bleeding hearts to band together—under government supervision, of course—to donate their time and money.

This is all very well—after the fashion of a harried parent who allows a child to cut the grass with a plastic mower. Except that, in reality, the child is a co-owner of the house and has ideas about how to manage the yard, while the parent obsessively demands control and recognition. [Source]

While the government has encouraged reporting on positive aspects of official rescue and recovery efforts in the run-up to the anniversary, journalists who try to report independently have faced interference, including an AFP reporter who tried to visit a pig famous for its miraculous survival of the quake:

While some aspects of the earthquake remain highly sensitive, authorities warmly welcomed reporters interested in writing uplifting stories about the success of reconstruction or survivors’ resilience.

But in China, it is always hard to know where the line is. And in a country where it is illegal to disparage national heroes, even a famous pig can become a sensitive subject.

[…] As an AFP reporter tried to chat with visitors, three plainclothes police stopped the interview and began questioning the journalists about their plans for covering the earthquake anniversary, before escorting them out of the museum.

[…] As the police tussled with journalists, a man visiting the museum with his parents, watched Zhu tottering among the students: “She’s a symbol of China’s strength.” [Source]

See photos from Wenchuan, ten years later, from The Atlantic. See also all of CDT’s coverage of the earthquake and it’s aftermath.