Cao Cao’s Tomb is a Fake

Cao Cao was one of the three warlords competing for control of China after the downfall of the mighty Han empire (BC206 – AD 220 CE). Cao’s life was popularized in The Legend of Three Kingdoms, a novelized history which has been revered as one of the four Chinese literature classics.

According to the Modern Express, 23 experts at an academic forum in Suzhou have declared that the tomb is a fake, citing anachronistic styles of engraving Chinese characters as one of the sources of their suspicion. The reports says that Chinese historians are now divided into “pro-Cao” and “anti-Cao” factions.

The article also notes that soon after the announcement, the excavation site was opened to the public, with a ticket price of 60 yuan a person.

China Media Project shares a satirical cartoon on the topic: 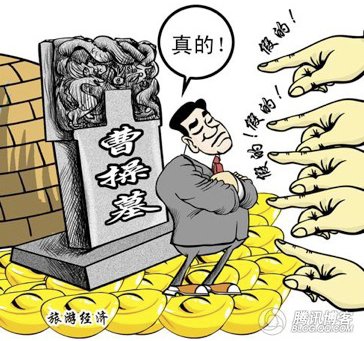 The tomb was unearthed in December 2009.

Ministry of Truth: End of the World

China Braces For End Of World

The Standard: Commerce over culture