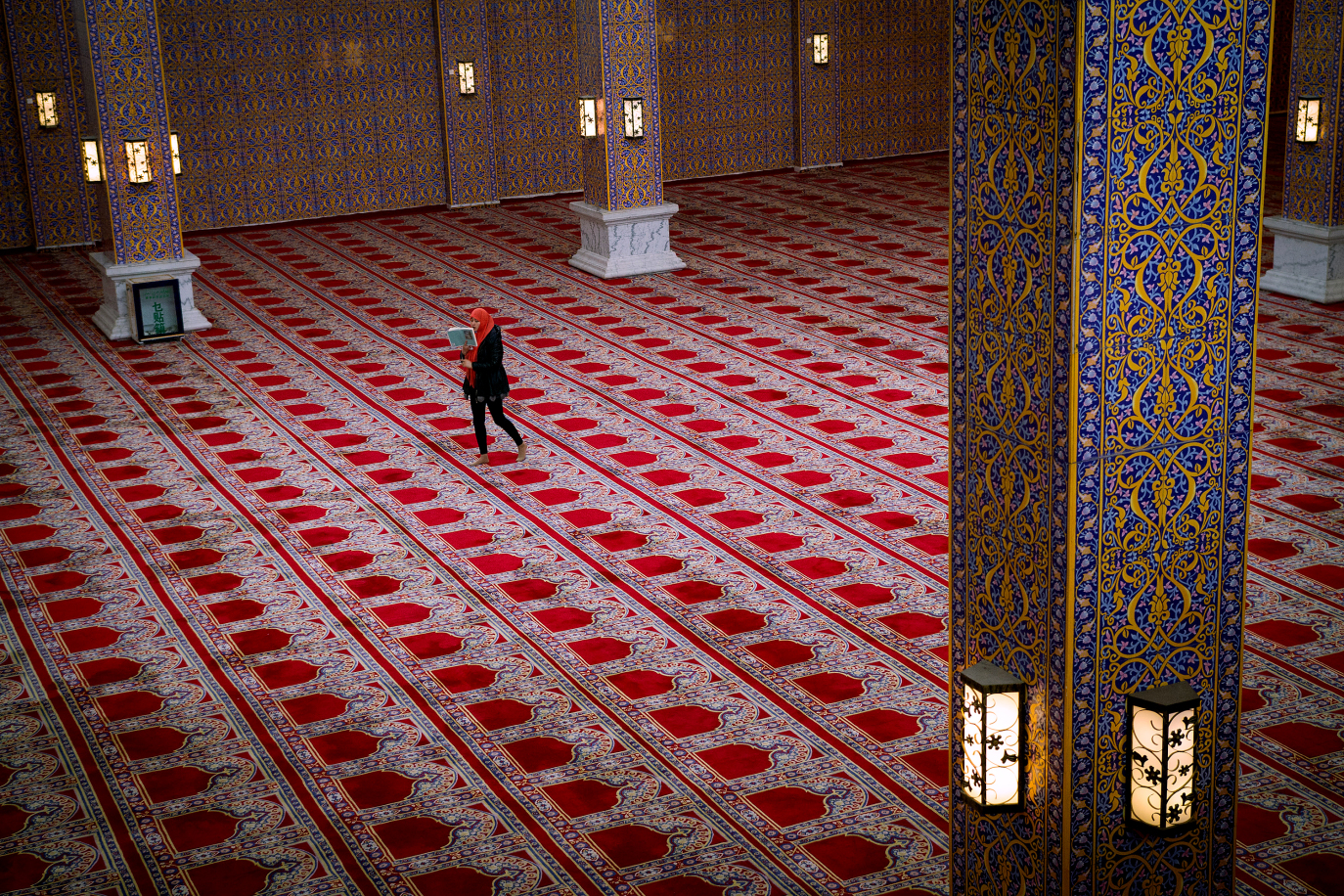 As members of the predominately Muslim Uighur ethnic minority have found increased restrictions on their religious practice amid an ongoing “war against terrorism” focused mainly on the Xinjiang region, it has been noted that Hui Muslims enjoy much more religious freedom. In a 2014 article for TIME, Hannah Beech wrote of a “religious boom” in Hui strongholds like Linxia, Gansu, and the Ningxia Hui Autonomous Region; last year at ChinaFile, Bethany Allen-Ebrahimian wrote that Hui women “enjoy unprecedented space for religious expression” compared to Uyghurs, who “face more restrictions on their faith than they would almost anywhere else in the world.” (It should be noted that members of the Hui, a group ethnically and linguistically similar to the Han majority, have noted increasing limits to their religious freedom in recent years.) Recently, there have been signs that the state’s relative acceptance of open religiosity by Hui Muslims may be hitting limits as top Chinese officials—as high up in the chain of command as Xi Jinping—warn of the dangers of religion. At The Independent, Samuel Osborne reports on a provincial government directive in Gansu, a province with a sizable population of Hui, banning religion in schools after a video of a young girl reciting verses from the Quran went viral online:

“This video has drawn a gasp from the public, as many people are infuriated,” a statement from the education authority said.

“The Education Department of Gansu province strongly condemns the act that harms the mental health of the youth, and demands education agencies of all levels to stop it resolutely and strictly bans religion from campuses.”

The video shows the young girl wearing a black Muslim head covering and reciting verses from the Quran as her classmates look on.

Gansu is home to around 1.6 billion Muslims, the third largest population of Muslims in China’s provinces and regions, behind Xinjiang and Ningxia. […] [Source]

At China Change, Wai Ling Yeung has more details on the video (which she points out was originally posted in 2014) and the clamor it stirred up online, the seeming shift in official tolerance for Hui religious  expression, and online protest (and subsequent backlash) from a prominent Hui intellectual:

Recently a video of a 5-year-old Hui Muslim kindergarten pupil from Gansu province reciting verses from the Qur’an went viral on China’s social media, attracting almost unanimous condemnation from presumably Han Chinese netizens. At a discussion forum, for example, several comments labelled the preaching of religion to children as “evil cult” behavior. They called for netizens to “say no to evil cults and to stop evil cults from invading schools.” Others questioned why schools allowed children to “wear black head scarves and black robes as if they’re adults.” They also expressed support for legislation that “set an age limit to religious freedom.” One comment went as far as asking all Hui Muslims to move to the Middle East. “ In my opinion, their religion has no part in Chinese civilization. It belongs somewhere else. I hope they will all leave.”

[…] Provincial education authorities subsequently ordered a strict adherence to a ban on religion in schools. On Twitter, when Ismael, a Hui Muslim poet and blogger from Shandong, a coastal province, defended Hui Muslims’ right to freedom of religion, his Twitter account was invaded by a torrent of abusive responses to his recent tweets (here, here and here for just a few examples). As someone who re-posted Ismael’s tweets, I bore witness to this unfortunate episode of cyberbullying on Twitter; I later learnt that Ismael had sustained even more serious abuses at other Chinese online fora.

Ismael worries about the implications of what he describes as coordinated campaigns to ramp up racial tension against Hui Muslims. His suspicion is not groundless.

[…] According to Ismael, anti-Muslim sentiment is fast spreading among mainstream bloggers as censors at Weibo are working overtime deleting accounts of known Hui Muslims, in an attempt to prevent them from defending their religion. [Source]

Meanwhile, Beijing is taking efforts to make a city in Ningxia Hui Autonomous Region a travel destination for wealthy Muslims from the Arab world and a soft power showcase to counter coverage of the religious crackdown in Xinjiang. At Foreign Policy, Kyle Haddad-Fonda reports on a campaign to build Yinchuan into a major tourist destination—complete with a Muslim theme park now under construction—and the diplomatic and soft culture goals driving Beijing to build it:

The centerpiece of Yinchuan’s transformation is a lavish theme park that celebrates the history and culture of China’s largest Muslim ethnicity, the Hui. According to Ningxia’s tourism bureau, the China Hui Culture Park is a “Sino-Arab cultural bridge” that can “promote all aspects of Sino-Arab exchange and cooperation.” The park achieves a monumental scale, with its sparkling edifices designed to evoke India’s Taj Mahal and Turkey’s Blue Mosque.

[…] At a moment in which China’s ties to the Islamic world are fraught with tension, it is easy to see why this shift [from showcasing Xinjiang and the Uyghurs to showcasing the Hui] has occurred. In the past few years, the Chinese government has come under fire for its alleged repression of its Muslims. The nominal leader of the Islamic State, Abu Bakr al-Baghdadi, declared in July 2014 that China is a country where “Muslim rights are forcibly seized.” After the government of Turkey denounced China’s policies in Xinjiang in July 2015, protestors took to the streets of Istanbul, vandalizing local Chinese restaurants and attacking several Chinese tour groups. In December, a media center linked to the Islamic State ramped up its criticism of China and began appealing directly to the Hui as well as the Uighur when it released a nasheed—a type of Islamic chant—in fluent Mandarin calling on Muslims to “wake up” to overcome “a century of slavery.” Together, these developments have demonstrated the concern of some Middle Eastern Muslims for their coreligionists and underscored Beijing’s ongoing interest in promoting an alternative conception of Chinese Islam.

[…] That alternative takes material form in Yinchuan’s opulent Hui Culture Park. The fundamental question it poses is whether the Chinese government, by spending money to promote its own vision of Islam in China, will be able to shape a global narrative and earn prestige on the world stage.

[…] A handmade cardboard sign above the lone operational ticket window declared that the admission price had been temporarily discounted from about $12.25 to $9.20. “Construction,” explained the ticket seller succinctly as I gestured toward it. There is always construction at the Hui Culture Park. Since the park opened to the public in 2005, Ningxia’s authorities have pressed forward with their plan to turn it into a global tourist destination. Behind chain-link fences, work is underway on the second of a three-phase master plan that calls for the completed park to occupy nearly 165 acres. This year, workers also closed the park’s main museum of Hui artifacts, housed in a building shaped like the Chinese character for “Hui,” for an extensive renovation, even though the original structure is only a decade old. […] [Source]

Early this year, the Los Angeles Times’ Jonathan Kaiman reported on official concerns over the spread of Salafism, an ultraconservative Sunni reform movement practiced by many Saudi clerics, among Hui and Uyghur Muslims. These concerns are security related, but also have a diplomatic angle; Kaiman wrote “Saudi-China grass-roots relationship has grown more complex. Experts say that Beijing increasingly views foreign religious influence as a threat and that Chinese Salafis have rejected overtures from Saudi patrons, fearful about how officials — and other Chinese Muslim groups — would react. China’s relationship with Saudi Arabia, the world’s second-biggest oil producer, has not suffered any obvious setbacks.”