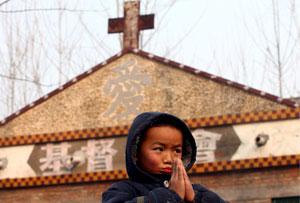 Xi also said the internet was a key propaganda front to promote the Communist Party’s stand on religion. “We must resolutely resist overseas infiltration through religious means and guard against ideological infringement by extremists,” Xinhua on Saturday quoted Xi as saying.

He urged officials to fully implement policies on religious freedom, stressing that religious groups must abide by the party’s leadership.

Religious groups should “merge religious doctrines with Chinese culture, abide by Chinese laws and regulations, and devote themselves to China’s reform and opening-up drive and socialist modernisation to contribute to the realisation of the Chinese dream of national rejuvenation,” he was quoted as saying. [Source]

Xi’s statements follow broad efforts by the Chinese state to control and regulate religion, particularly the practice of Islam in Xinjiang and the spread of Christianity elsewhere across the country. Under Xi’s administration, authorities have passed new rules governing dress for Muslim Uyghurs and education policies aimed at cultural “blending” in Xinjiang. These measures have accompanied an anti-terror campaign launched in response to a series of violent attacks attributed to Xinjiang separatists and religious extremists whom authorities claim are linked to the global jihad movement. Meanwhile, officials in Zhejiang have removed over 1,200 crosses and demolished several churches since 2013 in an apparent attempt to halt the growth of Christianity in the region. A number of Christian activists and lawyers were detained and later released for protesting against the removal of crosses. A prominent Protestant pastor was also taken into custody in February on suspicion of embezzlement, a case that supporters believe is linked to the pastor’s involvement in the protests. Buddhism, too, faces many legal and political hurdles as a large number of temples struggle to obtain the required religious licenses. The Party has also appointed itself guardian of Buddhist tradition in a long-running dispute with the Dalai Lama over his reincarnation.

In his address, Xi ordered Party members to act as “unyielding Marxist atheists.” In addition, he called on religious groups to abide by “socialist core values,” echoing earlier efforts by the state to promote a kind of Christianity that is “compatible” with Chinese socialism. From the AFP:

“Religious groups… must adhere to the leadership of the Communist Party of China (CPC),” Xi told senior party officials at a conference ending on Saturday, the official Xinhua news agency said.

But party members must be “unyielding Marxist atheists”, he said, calling on them to “resolutely guard against overseas infiltrations via religious means”.

[…] “We should guide and educate the religious circle and their followers with the socialist core values,” Xi told a two-day meeting attended by several members of the ruling Politburo Standing Committee, Xinhua said.

Beijing in the 1970s abandoned attempts to eradicate organised religion, opting for control through officially sanctioned churches, temples and mosques which blend theology and Communist rhetoric.

Xi indicated that such attempts would continue, calling for efforts to “merge religious doctrines with Chinese culture”. [Source]

A blueprint to “localize” the country’s officially sanctioned religions has been put forward as the centerpiece of the campaign against foreign infiltration. The scheme has been praised by a number of religious leaders within China. From Kou Jie at Global Times:

During the conference, Xi said that one key mission in helping religions adapt to the socialist society is localization.

[…] “Promoting the localization of foreign religions is a highlight of the conference, and it’s the first time the general secretary of the Party’s central committee has given a comprehensive theoretical explanation on the issue,” Zhu said.

“Generally speaking, China’s religious situation is in good shape, though there are some problems that need to be urgently solved,” Zhu said, saying Islam in some regions is inclined toward de-sinicization and extremist infiltration, while the Vatican uses hierarchy to vie for dominant rights over China’s Catholics.

The attack on religion is one facet of China’s campaign against Western influence. Most recently, the government issued warnings about the potential dangers of dating foreigners as well as the national security risks posed by students returning from overseas. Officials are also currently reviewing a draft Foreign NGO Management Law that, if passed, would require foreign non-governmental organizations to register with the Ministry of Public Security and operate under an official sponsor.