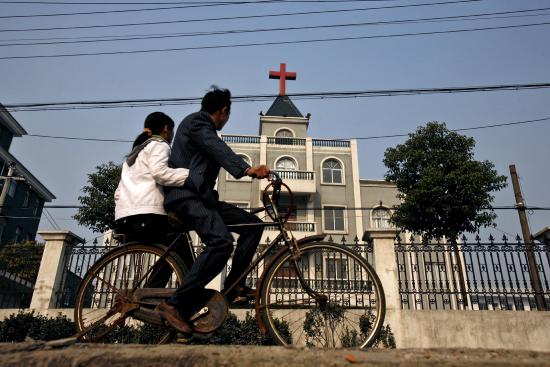 Christian rights lawyer Zhang Kai announced on social media on Wednesday that he has been released by Chinese authorities after several months in detention. Zhang was taken into custody in Wenzhou last year after providing legal aid to local churches facing cross removals. His confession was subsequently broadcast on state television, part of a recent trend that has drawn criticism even from within the government’s own advisory body. The New York Times’ Edward Wong reports:

The brief message posted to Mr. Zhang’s account on the WeChat social network late Wednesday said that he was back home. “I have returned to my home in Inner Mongolia safely,” it said. “Thank you to all my friends for your concern, caring and giving consolation to my family during this time. And thanks to the Wenzhou police, who have taken care of me during this time.”

Officials had announced criminal charges against Mr. Zhang earlier, and it was unclear whether he had been released on bail pending a trial. He and his family members could not be reached for comment, butChina Aid, a Christian rights group based in the United States, said that it had confirmed his release with his relatives.

[…] Mr. Zhang was advising a Wenzhou church when he was detained. The police issued an order to place him under secret detention for up to six months, a colleague of Mr. Zhang’s, Yang Xingquan, said in an interview at the time. That procedure, called “residential surveillance in an undisclosed location,” has been used liberally by the Chinese police under the rule of Mr. Xi, who is overseeing a widespread clampdown on dissent in China and a dismantling of civil society.

Mr. Zhang had made an appointment last August to meet with an American State Department official to discuss religious freedom in China but was not able to attend the meeting because of his detention. The authorities charged him with endangering state security and assembling a crowd to disrupt social stability. [Source]

AFP reports that Zhang’s detention comes amid an extensive clampdown on China’s civil society under President Xi Jinping. Earlier this year, Pastor Gu Yuese of Zhejiang’s Chongyi Protestant Church was detained on suspicion of embezzlement. Others targeted as a part of the crackdown include human rights lawyers and activists. Chinese authorities have detained and questioned more than 300 lawyers since July of last year in an operation known as the “Black Friday” roundup.

Since President Xi Jinping came to power in 2012, the officially atheist Communist party has taken a harder line towards civil and religious society, including its some 70 million Christians.

More than 200 lawyers and legal activists, including Zhang, were questioned or detained in July as part of a sweeping nationwide crackdown. About a dozen have been formally arrested.

Officials in eastern Zhejiang province have demolished churches or removed crosses from their exteriors in a campaign that rights groups say has affected hundreds of parishes.

The state-run website Wenzhou Online last month cited police in Zhejiang as saying that Zhang had been identified as the “mastermind” behind a series of “illegal religious gatherings”.

Officials have removed over 1,200 crosses and demolished several Christian churches in Zhejiang province since 2013. A number of Christian leaders in the province took to the streets last July to protest against the government’s cross-removal campaign. The provincial government has insisted that the campaign is carried out “for the sake of safety and beauty.” However, a leaked official document suggests that the goal of the campaign is to crack down on religious freedom and halt the spread of Christianity. Zhejiang authorities are currently drafting new rules to regulate the attachment of crosses on religious buildings.