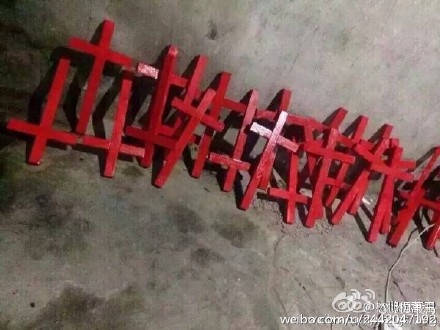 At The Guardian, Tom Phillips reports that Christian leaders in Wenzhou, a historically Christian region in coastal Zhejiang province, last week launched a street protest against the continued forced removal of crosses from churches in the region. Zhejiang is home to a large and growing population of Christians, and has a historical relationship with the religion.

Christian leaders – including an 89-year-old bishop – have taken to the streets of eastern China to protest against an “evil” campaign to remove crosses that many see as a coordinated Communist party attack on their faith.

[…] On Friday, around 20 Catholic clergy staged a rare public demonstration in Wenzhou – a coastal city known as the “Jerusalem of the East” – including Vincent Zhu Weifang, its elderly bishop.

A banner unfurled outside government offices by the group read: “Maintaining religious dignity and opposing the forced removal of crosses”.

[…] One church leader, whose name is being withheld to protect him from retaliation, said authorities were attempting to transform Christianity “into a tool that serves the party”.

[…] “Each time they take a cross down, we will put more up,” the Zhejiang church leader said. “We are even considering making flags and clothes with cross patterns. We will make the cross flourish throughout China.”

While protests over Zhejiang cross removals last July ended in violence, The Guardian notes that officers monitored but did not intervene at last week’s protest.

At Hong Kong Free Press, Vivienne Zeng reports that a campaign to proliferate the officially targeted religious symbol appears to have launched:

A Christian based in Wenzhou uploaded pictures on the social media platform Weibo showing people making crosses out of wood and painting them red in what appeared to be a small workshop.

Zhejiang Christian churches urged believers to hang crosses up at home and wear them, a message posted by the Weibo user along with the pictures said, adding “Let the cross take a root in everyone’s heart”.

On the same day, Father Chen Kaihua posted a similar message on Weibo calling on churches in other parts of the country to “join the relay” in the “safe and legal non-violent disobedience movement.”

“Tomorrow you will see crosses everywhere in Zhejiang,” Father Chen, who is teaching at the Sichuan Catholic Seminary, said on Weibo.

The campaign is part of a backlash against the Zhejiang government’s continuous removal of exterior church crosses on the grounds that they are illegal building structures and pose safety hazards. Officials have been taking down crosses from churches since 2014. […] [Source]

According to activists, over 1,200 crosses have been removed from Protestant and Catholic churches in the province since 2013; some churches have also been razed. Last year, authorities denied allegations that they were engaged in a crackdown on Christianity, claiming that crosses were being removed because they violated building codes. A leaked document, however, revealed the regulation of “overly popular” worship to be a provincial policy goal. In March of this year, a bishop with the Party-controlled Chinese Catholic Patriotic Association (CCPA) said that Beijing had ordered church demolitions to cease, but a provincial draft regulation from May foreshadowed the continuation of cross removals. Earlier this month, the Zhejiang branches of the CCPA and the Chinese Protestant Christian Council both issued open letters condemning officials for violating Chinese law by demolishing churches.

Last April, the State Administration for Religious Affairs announced that it will “continue to promote the development of Christianity […] in a way compatible with the country’s path of socialism.” Christian activists suspect at least tacit approval from central authorities on the continuation of cross removals in Zhejiang.