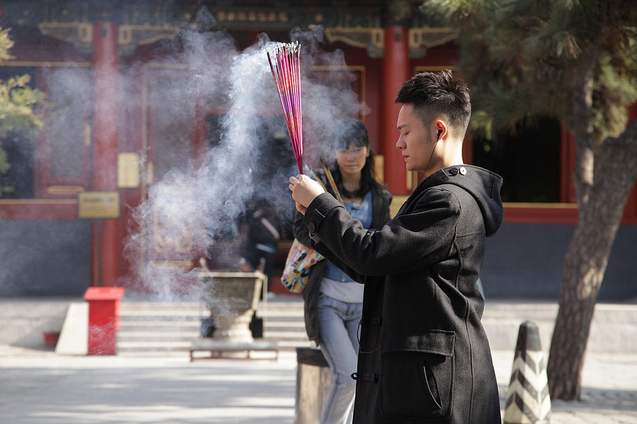 At TIME, Yang Siqi reports on Buddhism’s role in the well-documented religious revival sweeping China’s middle-class. Targeted as representative of the “Four Olds” during the Cultural Revolution, many Buddhist temples and relics were destroyed, and practitioners were persecuted and re-educated. Amid the current revival, Buddhism’s long history in China lends it particular allure, and the religion (along with other “traditional” faiths) enjoys more leeway amid official efforts to regulate religion. However, it still faces significant hurdles on the legal and political fronts:

Like other faiths, Buddhism, which travelled to China two millennia ago from India, was targeted during the Cultural Revolution. The Changxing temple was razed. Former village head Zhang Qian, from a Buddhist family himself, remembers how his hands shook as he used a hammer to destroy the temple’s clay Buddhas. In Beijing alone, among 6,843 registered cultural relics, 4,922 were ruined during the Cultural Revolution. More than half a million antiques were destroyed. Buddhist monks were tortured and sacred books burned.

Even today, despite the ruling Communist Party’s generally welcoming attitude toward Buddhism, Changxing is not an officially sanctioned temple because registering for various religious licenses is a complex process, often dependent on the grace of powerful officials from the State Administration of Religious Affairs. Therefore, the temple—a few bare rooms, some old stone tablets, a huge incense burner covered with rust, and a poplar tree reputed to be 1,000 years old—is technically illegal. Thousands of temples across China that lack official paperwork have been similarly left in limbo. (Islam and Christianity face far more overt pressure from the ruling Communist Party, which in recent months has torn down churches and prevented Muslims from worship.)

[…] Earlier this month at the annual meeting of the National People’s Congress—China’s rubber-stamp parliament—Sheng Hui, a delegate who is also the vice president of the Buddhist Association of China, told domestic media that he hoped the government could formulate a new religious law as soon as possible. “Some powerful people take away the temples’ tangible and intangible assets,” he complained to China.com, a state-media website. “It’s hard for Buddhists to protect their own rights…[because] there is no religious law in China.” At present, there is only a “regulation on religious affairs” that was issued in 2004; the policy lacks legal teeth. [Source]