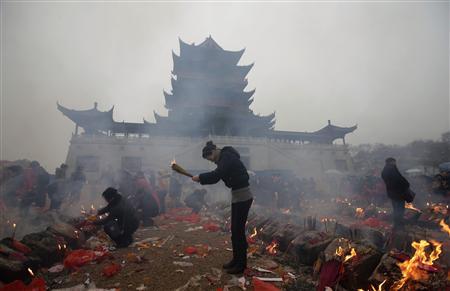 In its quest to quell public anger over a range of issues, the Xi Jinping administration may be turning to religion with plans to ease constrictions on traditional beliefs. Reuters reports:

Xi, who grew up in Mao’s puritan China, is troubled by what he sees as the country’s moral decline and obsession with money, said three independent sources with ties to the leadership.

He hopes China’s “traditional cultures” or faiths – Confucianism, Buddhism and Taoism – will help fill a void that has allowed corruption to flourish, the sources said.

[…] Government agencies would moderate policies towards Confucianism, Buddhism and Taoism in the hope these faiths would also help placate the disaffected who cannot afford homes, education and medical treatment, the sources said.

[…] Skeptics described such tactics as a ploy to divert blame away from the party for the many problems that anger ordinary Chinese, from corruption to land grabs. [Source]

See also a report from the Chronicle of Higher Education (via CDT) on the growth of Chinese philosophy as a topic of study in U.S. academia. Read more about Confucianism, Taoism, and Buddhism in China, via CDT.