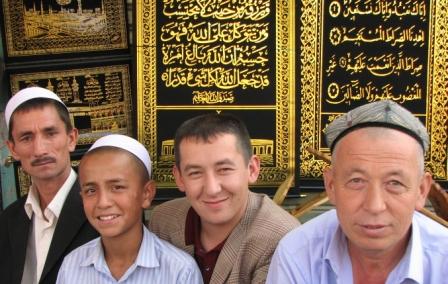 At a meeting in Kashgar, Xinjiang Party chief Zhang Chunxian announced imminent regional campaigns to encourage Mandarin language and the “blending” of races. Xinjiang is the center of a nationwide “war on terror” launched last May in response to an upswing in violence, blamed by authorities on Uyghur separatists and religious extremists. Reuters’ Megha Rajagopalan and Ben Blanchard report:

Efforts would be strengthened on “exchanges and blending” between ethnic groups and education in “the language commonly used in our country”, Zhang said, in a reference to Mandarin Chinese.

[…] China has long pushed Mandarin as a unifying tongue in a country with hundreds of different dialects and languages, but has faced considerable resistance in Xinjiang where it is viewed as another effort to dilute Uighur culture.

[…] Exiles and many rights groups say the real cause of the unrest is heavy-handed Chinese policies, including curbs on Uighur culture, and a dearth of economic opportunity. [Source]

While Mandarin education drives are sometimes seen as a state effort to dilute minority culture, arguments for the economic empowerment of Mandarin fluency have also been made.

Policies under the ongoing terror crackdown in Xinjiang have included enhanced security measures and intelligence gathering efforts, as well as the targeting of religious and cultural customs observed by many Uyghurs.

Following the recent announcement that all families in China will soon enjoy the relaxation of decades-long family planning restrictions, The Economist notes that officials in Xinjiang are pushing policies that will lower fertility rates for Uyghurs:

BIRTH restrictions imposed on China’s ethnic minorities have always been lighter than those on the Han majority. Han Chinese are only now being granted the right to have two children; most minorities living in urban areas have long enjoyed it. Non-Hans living in the countryside are allowed to have three, and sometimes more. But although family-planning rules are now being relaxed in China, in the far-western region of Xinjiang, where ethnic Uighurs make up 50% of the population, the government is tightening controls.

[…] Last year Xinjiang’s party chief said it was necessary to lower fertility and implement a family planning policy “equal for all ethnic groups”, as part of efforts to fight terrorism. Early this year another senior official said southern Xinjiang had “worryingly high birth rates”. This year, southern Xinjiang doubled payouts to Uighur couples who have fewer than their quota to 6,000 yuan ($950). Each parent also receives 1,800 yuan a year for life. [Source]