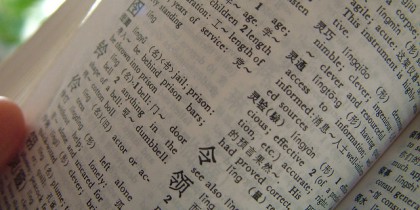 While China is often accused of stoking ethnic tensions by marginalizing minority languages, the University of Iowa’s Wenfang Tang argues that the problem in Tibetan and Uyghur areas is not too much Mandarin education, but too little. This, he suggests, inflames tensions by leaving people at an economic disadvantage which they blame on ethnic discrimination. From the University of Nottingham’s China Policy Institute Blog:

In addition to the shortage of Mandarin speaking teachers, another reason for minority regions’ Mandarin deficiency is the problem of bureaucratic turf war. For example, in the Education Law, all schools are required to use Mandarin as the language of instruction, while the Ethnic Autonomy Law encourages the use of ethnic languages in education. […]

[…] In summary, China’s overly lenient language policy has resulted in minority students being less likely to go to college and to find good jobs. Their income is lower than the Han majority. Consequently, they become angry and blame the problem as discrimination. To solve this problem, promoting Mandarin education should be the first step. Admittedly, such a solution will face more fury from those who are already critical of China’s ethnic policies. Ultimately, it is a tradeoff between keeping ethnic languagse and cultural identity and improving the economic opportunities and conditions for minorities. [Source]

A recent article in The Economist acknowledged the language barrier issue, but reported that genuine discrimination is also a serious problem:

[…] Even some of the best-educated Uighur and Tibetan migrants struggle to find work. Reza Hasmath of Oxford University found that minority candidates in Beijing, for example, were better educated on average than their Han counterparts, but got worse-paying jobs. A separate study found that CVs of Uighurs and Tibetans, whose ethnicities are clearly identifiable from their names (most Uighurs also look physically very different from Han Chinese), generated far fewer calls for interviews.

[…] One 25-year-old university graduate from the Xinjiang Class [a government affirmative action scheme which sends students to study outside Xinjiang] describes her months of difficulty in getting a job in Beijing, before landing one at a foreign-owned company. A large Chinese IT firm rescinded a job offer without explanation on the Friday before she was to start work. Another job interviewer then told her she should go back to Xinjiang. [The Rose-Hulman Institute of Technology’s Timothy] Grose reports that some Xinjiang Class members are put off jobs by being told that they cannot be provided with halal meals. [Source]

The Ministry of Education reported last September that 30% of Chinese cannot speak Mandarin, and only 7% can speak it “articulately and fluently.”

Columbia’s Robert Barnett discussed language policy and issues in Tibetan areas in a recent interview with Matt Adler at Culturally Curious. The apparent rise in ethnic tensions in China was the subject of a broad ChinaFile Conversation early last year.