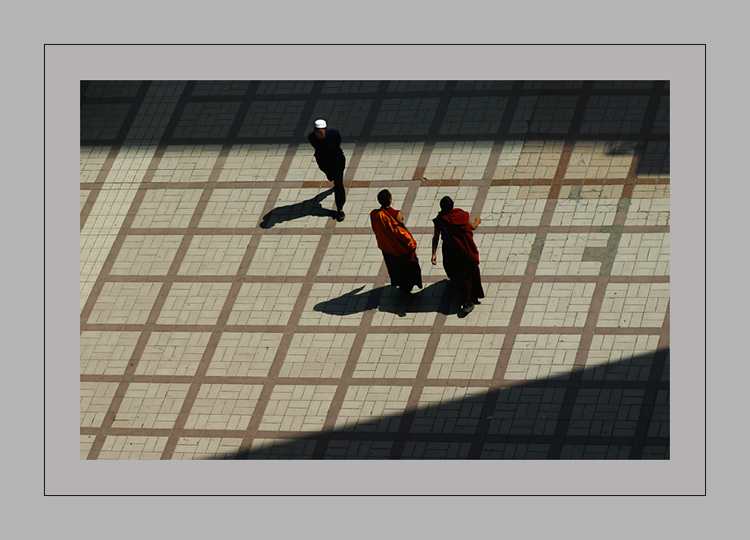 The Hui ethnic minority, descendants of Silk Road traders who settled and married in China, look and sound like the majority Han. They are distinguished only by their Muslim faith. The Hui have enjoyed far greater freedom of worship than China’s other major Muslim minority, the Uyghurs. “Indeed, members of the Muslim Hui community are enjoying a flowering of faith in what is, officially, still an atheist communist nation,” Hannah Beech wrote in Time in August 2014. In ChinaFile this July, Bethany Allen-Ebrahimian compared the “unprecedented space for religious expression” Hui women enjoy to the policing of Uyghur women’s religious observance.

But the Hui also face indignities, according to self-described screenwriter and “Weibo contract self-media” writer JundaledeManxiansheng (@君达乐的慢先生), whose essay on the subject has attracted over 200,000 readers since it was posted to Weibo on November 6. “The situation is getting worse” for the Hui in Qinghai, he writes, because of both government restrictions on worship and Han ethno-centrism. The author blasts the “Zhao family of Qinghai”—provincial Party secretary Zhao Leji is the son of Zhao Shoushan, governor from 1950-1952—for choosing imams, curbing the construction of mosques, and restricting people from taking the hajj to Mecca. (Coincidentally, the “Zhao family” is also a reference to officialdom in general.) Han, meanwhile, often fail to see that the government could easily treat them just as it treats other groups.

From what I remember, the Hui didn’t used to be like this. They were secular, a supremely normal and happy people. Going back there over the past few years, a Hui friend has also talked about these changes. He says the situation is getting worse. To this day, the Zhao family still won’t answer to the basic demands of the Hui (the Four Freedoms), after all these years: (1) Stop appointing imams, and let them be chosen by the people; (2) People should have the freedom to raise funds, buy land, and build mosques; (3) Lift the restrictions on the pilgrimage to Mecca; (4) I won’t say, it may get me into trouble.

All the sensible Hui intellectuals I know agree: the current ethnic policies just let the bad guys walk away. The government doesn’t bother to intervene when the thugs come to smash things up. Yet the mosque built with the money saved one naan sold at a time, that you demolish right away. You say there’s the rule about a mosque for every ten-some thousand believers, but why didn’t you say anything when we bought the land from you? Then when those Hui college students complain online, thousands of Han chauvinists reply that socialism is just fucked up like that. And how do you expect a naan-seller like me to deal with this? Of course we’ll fight against Han people whenever we can. It’s that simple. The middle-aged men in our country like to cite the “American imperialist plot” whenever something bad happens. Other people can apply the same logic.

Of course, the Hui intellectuals know that the ruling party and the people aren’t the same thing. But even many of our college students can’t seem to get it straight. They still think the strength of the government and the military is their own strength. They don’t know that one day this strong army will take to Chang’an Avenue and clean them up. And these are the educated people. There’s nothing you can do when hatred is cast on all Han. As a Han, what you should do is urge the government to respond to people’s demands and punish the bad guys. You should try to cut off the source of hatred, to tell others that there are rules, rather than shouting online that we should enforce the same policies on the Hui as we have on the Tibetans and “take care” of the whole lot. Your master isn’t going to listen to you when you are merely a pig raised for your meat. Why should the Han be the good guys? Because every time something crazy happens, we are somehow the only victims. One time during a riot (can’t remember which, there are too many), I went to a residential community of the Qinghai provincial government. They didn’t even have guards outside. You had to buzz and report your address and reason for visiting. They would then crack open the iron gate for you to squeeze in. Inside it was swarming with soldiers, while outside it was pandemonium. Where was your legendary army? Inside the gated community? Even your Zhao masters are such cowards, so what are we shitizens supposed to do?

You don’t care about the rioters and the looters, the thieves and the drug dealers. That leaves you free to get rid of the imam and select a new, submissive one with two years of Party School training. When people get upset about this and protest, those senseless Zhao masters make the “no way” face and say, “We’ve done so much for you, why are you acting like this?” The masters feel wronged and the Han chauvinists (followers of Wang Zhen) weep with them, “Oh masters, why don’t they understand your pain?” The weirdest part of all these is that each and every imam they select ends up being a disgrace: they embezzle donations, profit from licensing Saudi relics, make mosques into tourist sites to make extra money, bring in buses of tourists with windbreakers and Canon cameras.

Then there’s the quota on pilgrimage to Mecca. The urban middle class can’t imagine how difficult it is for Tibetans, Hui, and Uyghurs to get a passport. It’s a long process, and you have to have a letter of invitation. They’ve designed the process as a humiliating closed loop of passing the buck. Everyone in China has at least some experience with the the bad attitudes of bureaucrats, and what ethnic group do you think most of them are from? Now take a guess how many short-tempered Hui people go through this humiliating cycle every year, hoping to follow the teachings of the Koran? Most people can’t make it to Mecca because those precious slots are taken by the Muslim officials named Zhao and their families. Oddly, most of them are those appointed imams. One person’s lifelong dream is another’s winter break.

Why do they set a quota, anyway? The Zhaos have their logic. What if they go and spread lies to the Muslim world? During the Cultural Revolution, the Hui in Qinghai were forced to raise pigs, and would be punished if the pigs failed to reach a certain weight. So a group of frightened Muslims would watch the pigs step onto the weighbridge. When the dial pointed to 150 kilograms, they would excitedly shake each other’s hands (here come the cheers of the Han chauvinists). “So, only those I trust can go to Mecca.” Will there be any trouble if the restriction is lifted? Maybe. That might add a little work for the Zhaos. So they say no. “You make any trouble and you’re all banned. Your problems aren’t mine.” This same logic applies to schools for migrant children.

We don’t really hear about these grievances anymore, do we? Let’s put it this way: if Luo Yonghao were Hui from Xining, he wouldn’t have gotten to where he is today. If a Hui wants to protect their rights, the government doesn’t want to hear it. If you take your issues to the street, you’ll get a lot of support. Then it becomes a riot and people shout all sorts of slogans. It doesn’t matter what kind of rights you were trying to protect in the beginning, like the parking lot was charging you more than it should, or maybe your kids’ school uniform was too expensive, it all comes down to “expel the barbarians.” Then the pandas come to investigate: you were inciting separatism, it’s jail for you. Those sensible Muslim intellectuals, including the imams, used to be the only buffer, but now they’re either in jail or prohibited from preaching. There’s no one left with any sense to take the lead.

A Qinghai United Front official once told me at dinner, “If only the Muslims had someone like the Panchen Lama. Then all we would have to do is to control him and that would be that.” Everyone toasted his wisdom. Four hours later, after we’d watched and harassed the ethnic minority song and dance troupe, I walked with the official to the parking lot. Suddenly someone jumped out and kneeled in front of us, talking too fast to understand. In Xining, the (five-star) Yinlong Hotel is the only place where you can air your grievances. Our friend was quickly dragged away. Master Zhao then glowed about the bike race around Qinghai Lake. When we got into the car, his intoxication hit him. He wept aloud, “Oh, little X, my life is so hard.” [Chinese]