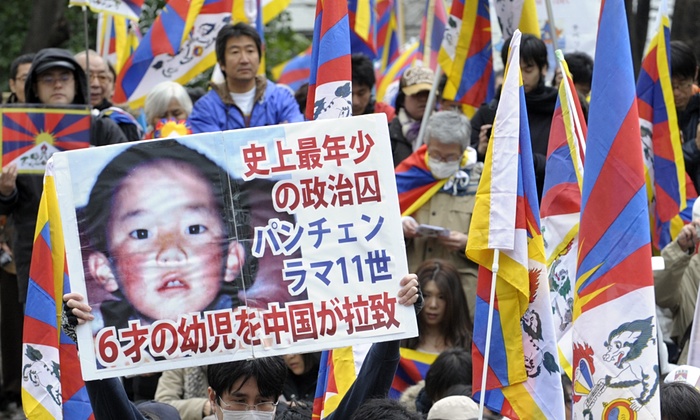 A government official who serves as a liaison to Tibetans claimed on Sunday that Gendun Choekyi Nyima, who was taken into custody in 1995 after being named by the Dalai Lama as the reincarnation of Panchen Lama at the age of six, is “growing up healthily and does not wish to be disturbed.” From Reuters’s Sui-Lee Wee:

Norbu Dunzhub denounced the Dalai Lama for declaring the boy as the reincarnation of the Panchen Lama, saying the selection “ignored historical customs and destroyed religious rituals”.

“The identification was done without authorisation. It was illegal and invalid,” he said.

This year marks the 20th anniversary of Gendun Choekyi Nyima’s disappearance, whose fate remains of deep concern to many Tibetans.

Though officially atheist, the Chinese Communist Party has long maintained that Gendun Choekyi Nyima is not the real Panchen Lama.

[…] In 1995, in a bid to win the hearts and minds of the Tibetans, the government selected Gyaltsen Norbu as the 11th Panchen Lama. He is reviled by many Tibetans as a fake. [Source]

Global Times: China, in taking Panchen Lama away, has helped him evade "harassment of Dalai clique and Western media" http://t.co/h9XWFPqaoI

The fate of Gendun Choekyi Nyima is part of an ongoing struggle between the Chinese government and Tibetan spiritual leaders over the right to confirm reincarnations, a right that the government claims to be fully entitled to. Xinhua reports:

A Chinese official on Sunday defended the role of the government in the Tibetan Buddhism system of reincarnation, saying whatever the Dalai Lama says or does can’t change the central government’s right to confirm the new incarnation.

[…] Norbu Dondup said the government attaches great importance to the reincarnation system, which since the Qing Dynasty has been affirmed and regulated by the central government.

The current regulation on the reincarnation system is clearly outlined in a document issued by the State Administration for Religious Affairs in 2007, he added.

“So, no matter what the Dalai Lama says or does, he can’t deny the central government’s right to confirm the new incarnation,” said the official. [Source]

The Panchen Lama’s case also highlights the issue of the Dalai Lama’s eventual succession, after he announced the possibility of ending his line to prevent Beijing from usurping the process.