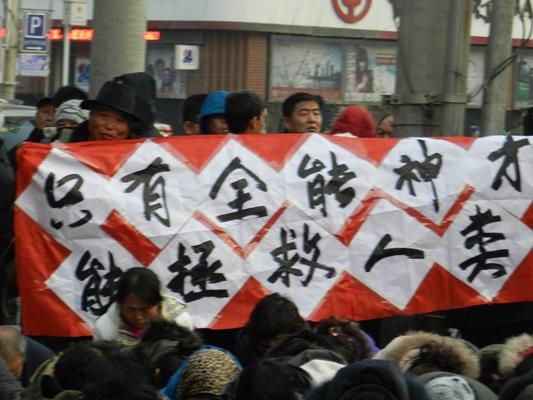 “Only Almighty God can save humanity.”

Pan asks that all levels of authority unite their thinking, raise awareness, stress key points, and devote utmost attention to looking out for the “Real God” cult. Realistically grasp the organizational characteristics, management targets, re-education, and guidance of [key members of] the evil cult. Complete tasks to standard, organize safeguards to standard, and coordinate government departments, villages, and town (streets) to standard. Practically create a joint workforce. Effectively stymie the momentum of the evil cult’s public conversion activities. Guarantee the political and social harmony and stability of the entire county.

During the meeting, county Politics and Law Commission Vice-Secretary Yang Zhuodong expounded on the harmfulness and present severity of “Real God” and other evil cults, setting forth prevention and control work for the current period of time. County Political Commissar Qiu Guoting introduced the origins and characteristics of the “Real God” cult, putting forth the specific plan for its investigation and management.

According to our understanding, “Real God” is also known as “Eastern Lightning.” Cult members call it “Almighty God.” This group creates an atmosphere of social panic by spreading rumors and propagating false claims and heresies, such as the apocalypse. The cult seriously endangers social stability. It is essentially an anti-social, misanthropic, perverse religious sect. Recently its activities have become rather common in certain villages and towns in Xinchang, particularly in remoter areas. It has an evil influence; the need to crack down and bring it under control is acute. All levels of the government are to alert the masses to awaken to the nature of the “Real God” cult, such that they do not fall prey to the faith. When propaganda materials or individuals from this evil cult are discovered, please report this immediately to the local police station or call the police by dialing 110. (December 12, 2012)