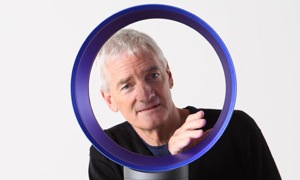 British inventor James Dyson has accused the Chinese government of failing to stop copycat manufacturers and maintaining an illegal double standard over foreign versus domestic patent applications. From The Guardian:

“They are running the risk of being expelled from the WTO. They are creating an unlevel playing field by taking our technology and selling it all over the world.” China joined the WTO, the body that enforces global trade rules, in 2001.

Dyson argues that China benefits from strictly monitored IP regimes outside its own border, but has failed to crack down on domestic offenders as it pursues rapid economic growth. The inventor cited a recent case in China where his company successfully sued a firm manufacturing a copy of its bladeless electronic fan.

“We had to put a private detective in their factory and take photos of them making the fans. Then we won the case and they were fined $7,500 but they didn’t pay the fine and they just carried on,” he said. Dyson is pursuing 20 design or patent cases around the world, many of them related to the distribution and sale of products made in China. The inventor did not put a figure on the amount of lost revenue but said the total was “quite a lot”. The business has spent $3m (£1.9m) on legal fees.

The inventor has spoken out against intellectual property theft in China before, appealing to David Cameron to raise the issue during Wen Jiabao’s visit to the UK in June. In March, Dyson warned that industrial espionage was being carried out by Chinese students at British universities, claims which the Chinese embassy in London decried as “shocking and entirely unfounded and illogical”. From The Sunday Times, via its sibling The Australian:

Dyson, best known for inventing the bagless vacuum cleaner, said he had evidence that the bugs were left by postgraduates to ensure the thefts continued after they had returned home.

He said the extent to which foreign students dominated many science, technology and engineering research posts, often paid for by the British taxpayer, was “madness”.

“As an exporter and someone developing technology here, it’s very disheartening to see these universities being used by foreign countries and foreign companies,” said Dyson.

Universities acknowledge the threat from espionage, particularly by Chinese students, and are taking measures to counter it. Nicola Dandridge, chief executive of Universities UK, said: “We are very aware this is going on and we are taking it very seriously.”

China did receive some praise from Dyson in a September round-table interview with Wired.com: he approvingly noted China’s production of 600,000 engineering graduates a year, nine times more than the US and 27 times more than the UK, though less than India’s 1,000,000. Dyson also explained why $500+ vacuum cleaners are a tough sell in China, and his annoyance at suggestions that his products’ use of transparent materials was inspired by the iMac.