New iPad: Made, but Not Yet Sold in China 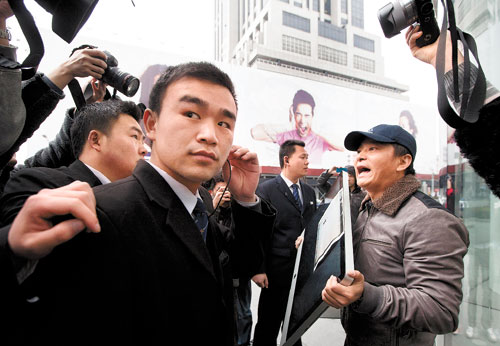 A man outside Shanghai’s Middle Huaihai Road store attracted the attention of 10 police officers when he threatened to smash what he claimed was a defective 27-inch iMac that he had purchased, according to China Daily (which published the above photo):

“I told them I need a refund, and they owe Chinese users an apology,” the man, Zou Hongqing, told China Daily.

Zou said his computer developed dust spots because of defective design and should be recalled.

He said he arrived in Shanghai six days ago to sue Best Buy, an authorized distributor of Apple.

Shanghai’s Xuhui District Court will mediate between Zou and Best Buy on March 20.

Apple declined to comment on the incident, but had said earlier that the problem was caused by the dust in the air in China, rather than being a quality or design flaw, provoking outrage among users nationwide.

Apple’s third generation iPad also went on sale today in the U.S. and 9 other countries around the world, including Hong Kong, where the San Francisco Chronicle reports that Apple utilized an online lottery system to avoid the riot-like atmosphere that engulfed one of its Beijing stores when the iPhone 4S launched in January. The Globe and Mail posted a video report from Hong Kong, where it found no long queues outside Apple’s IFC store and paid a visit to a local reseller. The South China Morning post also reported that a secondary market opened outside the story almost immediately, despite Apple’s best efforts to prevent scalping:

Some resellers were having difficulty getting buyers to part with their new iPads. A Guangzhou student offered RMB$15,000 to the very first iPad buyer, but was rejected. He was trying to buy it for an “important [person]”, but refused to say who he meant.

Murat Omurov, 26, said he travelled all the way from Kazakhstan to buy iPads. He was offered HK$5,000 to buyers but, by late morning, had found no one willing to sell.

Bloomberg reports that hopeful buyers in mainland China will have to wait to buy the new iPad, however, despite the irony that millions of the devices are already in China.