A Strange Apology on a Certain Day 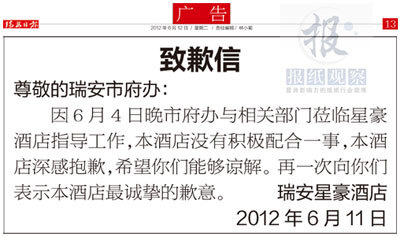 A hotel in the southern province of Zhejiang made a vague apology on an ominous date:

The June 12 edition of the Rui’an Daily published an apology letter.  The Rui’an Grand Star Hotel announced that on the evening of June 4 city officials arrived at the hotel to direct business, but the hotel did not actively cooperate. The hotel states, “We hope that you can understand. We again extend our most sincere apologies.”

On the evening of June 4, the city government and relevant organs arrived at the Grand Star Hotel to direct business, but hotel staff did not actively cooperate. We wish to extend our deepest regret, and hope that you will understand. Once again, we want to express our most sincere apologies.

Responding to the online backlash against the local government, a Rui’an mayoral assistant told New Express on June 15, “This isn’t what people think. They made this apology without our knowledge. I have no idea if the person responsible is just ignorant or took the opportunity to be provocative.” The hotel has already closed for business due to “incomplete licensing and noise.”

Via SneezeBloid. Translated by Josh Rudolph.