A document released on Monday by China’s State Council Information Office titled The National Human Rights Action Plan of China (2012-2015) promises that review of all death penalty cases will be open to the public. From The Global Times:

The review of death penalty should include the questioning of the defendant, and listening to the opinions of his or her attorney if the attorney so demands, the action plan said.

The action plan said China will continue to push forward standardized measurement of penalty, and the people’s procuratorates will make suggestions on penalty measurement to the people’s courts when handling criminal cases.

The director of research for the Supreme People’s Court told The China Daily that tighter court procedures had already helped reduce the percentage of death penalty verdicts overturned, from 10 percent in 2010 to 7 percent last year:

“Courts have mastered uniform policy, including procedural and evidence norms, for cases in which the death penalty could be a possibility,” Hu said.

Consequently, the number of death sentences overturned due, for example, to mistakes in gathering evidence were significantly lower, he said.

Sentences that were overturned were mostly due to procedural flaws, inappropriate sentences or crimes related to finance.

The China Daily piece also included the below diagram outlining the steps in the judicial review process: 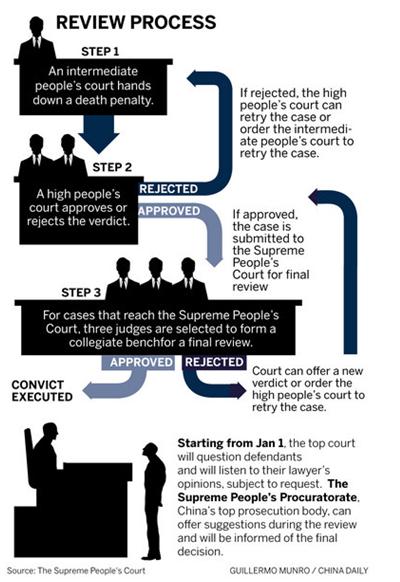 See also CDT coverage of Wu Ying, a Zhejiang billionaire entrepreneur whose death sentence for fraudulent fundraising was rejected by the Supreme People’s Court and sent back to Zhejiang’s high court for resentencing.