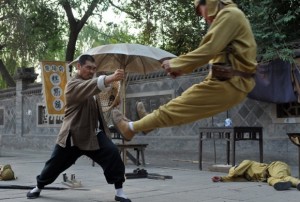 Succumbing to a kung fu master: it’s all in a day’s work.

In a February 4 story, the Qiangjiang Evening News reports on the business of war at Hengdian World Studios, China’s answer to Hollywood.

Shi Zhongpeng, a 26-year-old Heng piao [Hengdian World Studios commuter], has suddenly become an Internet star by “dying” eight times in one day while playing the role of Japanese soldier in different productions.

Shi Zhongpeng’s fame rose from widespread online reports on the “Hengdian Anti-Japanese Revolutionary Base.” In 2012, Hengdian Studios received 150 production teams, 48 of which made films of TV shows about the Anti-Japanese War. That amounts to about 30% of all productions. Even Hengdian Studios Entertainment Channel couldn’t help poking fun of the trend on Weibo, writing, “Today, there will be another 300 devils executed.” And the statistics are even more convincing. The Hengdian Studios Actors Guild employed 300,000 extras (including special extras) in 2012, and 60% of them had played “devils.”

Shi Zhongpeng is a case in point.

Shi says he has been in Hengdian for four years, and most often, he has played a Japanese soldier. In 2012, he participated in over 30 Anti-Japanese War productions and played a Japanese soldier over 200 times. On his most productive day, he “died” eight times. As an experienced “devil,” Shi summarizes what he’s learned in one sentence: “The more horrible you look, the better.” The casting teams specifically select people who are less attractive and somewhat vicious-looking to play “devils.” So during interviews, Shi hunches his back, squints his eyes, and presents a fierce, wretched look to boost his chances of being chosen for the part. His biggest wish is to play an Eighth Route soldier [from the Communist army] someday.

Besides the extras, full-time actors are also in on the action. Known as the “number one Heng piao,” Lin Jiangguo, from Xianju, Zhejiang Province, had roles in Jianghu Er’nu, I Want to be an Eighth Route Soldier, and Martyrs last year, all anti-Japanese productions. He has always played the awe-inspiring, righteous lead role or lead supporting role. Though “beating the devils” is indulgently satisfying, he feels exhausted after the three productions. But he still has to defeat more “devils” in 2013.

In the beginning of the New Year, Anti-Japanese War productions are still on the rise. According to the managing company of Hengdian Studios, nine out of 19 current productions are related to the Anti-Japanese War. To accommodate the high demand, Hengdian Studios is planning to build more Republican-era [1912-1949] sets. For example, a port city district will be added on Guangzhou Street; in the Revolutionary Expo City, another Republican city will be built.

Via AmazeNews. Translation by Junebug.