The following deleted Weibo posts were selected by CDT between February 26 and 27 from FreeWeibo.

@Bjluge: 【Beijing Evening News: China now has 1.18 million “Naked Officials”】These “naked officials” include administrative leaders, local leaders, and many leaders of state-owned enterprises. The number is quite astonishing. These people all have “white hearts under the red flag.” How can you tell which country are they are serving? These people, holding public power, pose a great loss and potential threat to the credibility of our nation, our country, and the Party.  http://t.cn/zYWbNtb

@ZhouPidong: I salute you, brave people! 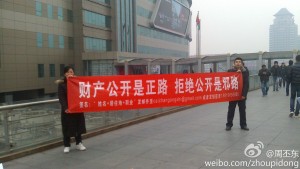 “Financial disclosure is the right path; refusal to do so is the evil path.

@visa827547966: The local government of Lanzhou practiced fraud to deceive the Secretary-General. Before Spring Festival, Secretary-General Xi went to Lanzhou and made an inspection visit to Wuquan Food Market. Around ten days before the inspection visit took place, a large group of government staff dressed up as salespersons and common folks and ran a couple of rehearsals. At the day of the inspection, the prices of all the vegetables were incredibly low! For example, Chinese leeks were two yuan per gram which, but went back to 13 yuan per gram the next day. Secretary-General Xi also inspected a supermarket and was greeted by the same charade.

@QianGang: 【Memo】People’s Daily report from October 6, 1998: Permanent Representative of China to the United Nations Qin Huasun signed the International Covenant on Civil and Political Rights on behalf of the Chinese government. Qin says that “achieving human rights is the common ideal of the entire human race; it’s also the long-term goal of the Chinese government to strive for.” China “respects and protects civil rights and political rights, and opposes all actions which violates citizens’ lawful rights.” (see the bottom right of the image below)

China has yet to ratify the Covenant.

@CaiXiaoxin: 【Exclusive】Sister Peng Liyuan responds to President Xi and calls on the PLA to continue to nurture the good working spirit of core values, strict discipline, the enforcement of rules, and uniform action among current revolutionary army men. In accordance with regulation, she voluntarily turned in an apartment assigned to her, located at West 3rd Ring Road [of Beijing], where she had lived for years. She has set herself as an example to support President Xi’s efforts in rectifying military discipline and to resist negative trends.

@LiXuewen: Li Shuangjiang can touch the sky. He has a female student, a singer, whose last name is Peng. You understand!

@IThinkThereforeIAmRationalV: A lot of propaganda slogans, i.e. “Without the Communist Party, there would be no new China” and “Only the Communist Party can save the people” obviously violate the Advertising Law, which forbids the use of “absolute words” and “guaranteed promises.” They are misleading promotions. Imagine if an advertisement said “Only Mayinglong can cure hemorrhoids.” The company would surely be fined, if not forced to close and reorganize.