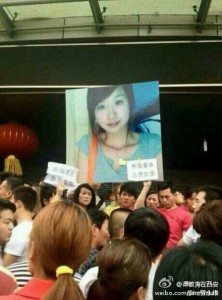 Protesters in Beijing yesterday want justice for Yuan Liya, who died on the morning of May 3. (via FreeWeibo)

Beijing Internet Supervision Office: Urgent Notice: Websites which have already posted news about the incident of the young Anhui woman who jumped from the Jingwen shopping center to her death must turn down the heat on coverage. You are not permitted to put the story on the homepage or make it the lead story. Websites which have not yet posted the story may only repost Peaceful Beijing [Beijing Public Security Bureau] weibo. Other information or images related to the incident must be completely erased. Please rigorously implement these work requests. (May 8, 2013)

Hundreds protested in Beijing yesterday to call for a thorough investigation into the May 3 death of 22-year-old Anhui migrant Yuan Liya. The authorities have said Yuan committed suicide by jumping from the fourth floor of Jingwen shopping center, where she worked a late night shift, but rumors spread online that she was raped by mall security guards and thrown from the building. Yuan’s family is pushing to have closed circuit video of the incident released.