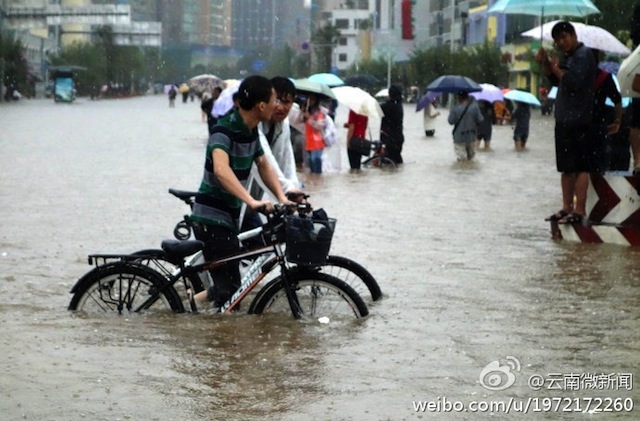 Torrential rains on Thursday and Friday have flooded Kunming, in Yunnan province, as Xinhua News reports that 2 people are dead and 1 still missing in the city’s third major flood since a drought ended in May:

The downpour began at 8 pm on Thursday and didn’t end until 4 pm on Friday, leaving thousands of residents stuck in their cars on waterlogged roads. Northern Kunming suffered from the largest amount of rain.

The rain also set a record for a four-hour period, according to the Kunming Flood Control and Drought Relief Office. Between 1 am to 5 am on Friday, 214 millimeters of rain unloaded onto the city.

The Yunnan Provincial Department of Civil Affairs estimated economic losses from the flood at more than 84 million yuan ($14 million). Officials and experts said the city’s poor drainage systems and inadequate flood control efforts were to blame for the deluge.

Xinhua posted a series of photos of the conditions in Kunming, many of which showed residents wading through knee-deep water. The Shanghaiist also posted photos of the flooding that emerged on social media, including the photo above. Heavy rainstorms across southwest China this month have also led to flooding in Sichuan province, where dozens were buried in a landslide.