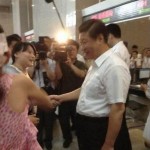 On his visit to the Wuhan Government Affairs Service Center yesterday–also known as the “Wuhan House” (武汉市民之家)–Xi Jinping shook hands with city resident Ms. Guo Tingting, greeting her, “Hello, gorgeous!” (美女，你好). The day before, Xi was spotted in Wuhan’s New Port braving the rain, pant legs rolled up and umbrella in hand. Photos of Xi in the rain appeared on Xinhua and CCTV, antidotes to contrasting photos of Chinese officials having umbrellas held for them.

These images of Xi as a man “of the people,” promoted in Xinhua and CCTV reports, 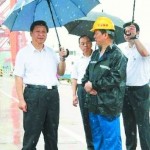 have met with plenty of ridicule online. On Weibo, @wis calls Xi’s greeting to Ms. Guo a “title bestowed on a beauty by the emperor” (御赐美女称号). @akid comments, “‘Hello, gorgeous’ and ‘the people know an act when they see it’–both demonstrated by the same man not a day apart from each other” (“美女你好” “什么是作秀老百姓一眼就能看出来” —— 以上出自同一人相隔不出一天). CDT Chinese has more scathing responses [zh]. None mention Bo Xilai, but messages in support of the former political heavyweight are deleted regularly.