Why China’s Farms Are Failing 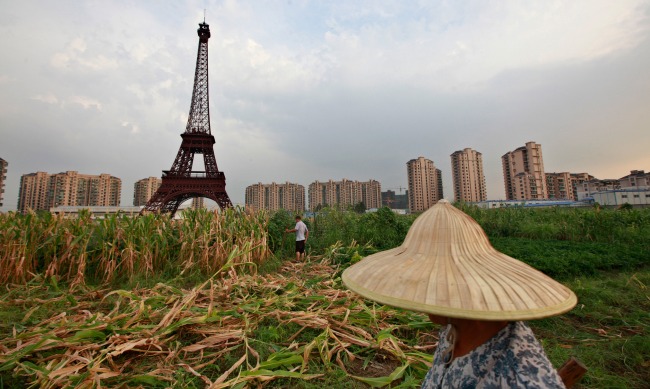 At The Atlantic, Tom Philpott looks at how the environmental damage brought by economic growth is hurting China’s food production system:

In short, I’ve found that in the process of emerging as the globe’s manufacturing center — the place that provides us with everything from the simplest of brooms to the smartest of phones — China has severely damaged its land and water resources, compromising its ability to increase food production even as its economy thunders along, its population grows (albeit slowly), and its people gain wealth, move up the food chain, and demand ever-more meat.

[…] But now, 35 years since it began reforming its state-dominated economy along market lines, China’s spectacular run as provider of its own food is looking severely strained. Its citizens’ appetite for meat is rising along with incomes, and mass-producing steaks and chops for 1.2 billion people requires tremendous amounts of land and water. Meanwhile, its manufacturing miracle — the very thing that financed its food miracle — has largely fouled up or just plain swallowed those very resources.

[…] China’s farmland is shrinking. Despite the country’s immense geographical footprint, there just isn’t that much to go around. Between 1997 and 2008, China saw 6.2 percent of its farmland engulfed by factories and sprawl.

[…] China’s food system is powered by coal. It’s not just industry that’s degrading the water and land China relies on for food. It’s also agriculture itself. China’s food production miracle has been driven by an ever-increasing annual cascade of synthetic nitrogen fertilizer (it now uses more than a third of global nitrogen output) — and its nitrogen industry relies on coal for 70 percent of its energy needs. To grow its food, in other words, China relies on an energy source that competes aggressively with farming for water. [Source]