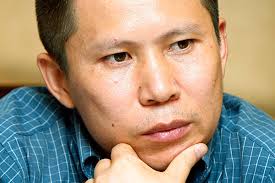 Hua Ze, a documentary filmmaker, has written an op-ed in the New York Times defending the work of lawyer and activist Xu Zhiyong, who has been detained since July 16:

Mr. Xu didn’t sit in his study writing reports, and he didn’t carry out his legal aid in a courtroom alone. For a 2005 report, he spent two months in an illegal encampment of impoverished petitioners who had traveled to Beijing to protest local injustices. He was beaten outside the State Bureau for Letters and Calls, where the petitions are filed. His findings helped bring an end to routine beatings of petitioners by official “interceptors” from their native communities. During one attempt to free petitioners from unofficial “black jails” where they were held pending repatriation to their hometowns, Mr. Xu told the assailants who beat him: “Go ahead. I won’t hit back.” In 2009, Mr. Xu was jailed for the first time, for nearly a month.

Rights activists say that a special investigative team has been gathering evidence against him, and was responsible for forcing Gongmeng’s office to close a year and a half ago. They say its landlord was coerced into revoking its lease, and other landlords were blocked from offering it space. Some volunteers and staff were arrested, and Mr. Xu’s young followers were threatened, the activists say.

But Mr. Xu has refused to buckle to pressure — from anyone. In 2011, when fellow dissidents criticized him for quickly concluding that the government was not to blame in the death of a village leader, I implored him: “Can you just not say anything?” That was the only time he lost his temper with me. He said the truth is the truth, and if we kept silent when the truth doesn’t fit our imagination or hopes, then how are we different from what we oppose? [Source]

Meanwhile, in its English edition, Global Times offers a very different portrayal of Xu and of fellow activist Yang Maodong (aka Guo Feixiong), who has also been detained:

The influence of activists like Guo and Xu is not as great as those verified names on Weibo, but they are famous among rights activists. Confronting the authorities has become their way of life and they are unlikely to compromise.

It has become the reality of China that a group of dissidents who are prone to confrontation exist in society. They pose challenge to social governance. They do things based on their own judgment rather than considering whether they are legitimate or not or whether they benefit social governance or not. They take confronting the authorities as a noble deed.

Obviously, China has not found a mature way to deal with these confrontational individuals. On the one hand, they play a new role in society and what they do is not all negative.

But on the other hand, they pose a danger to the current social governance system and long-term social stability. [Source]