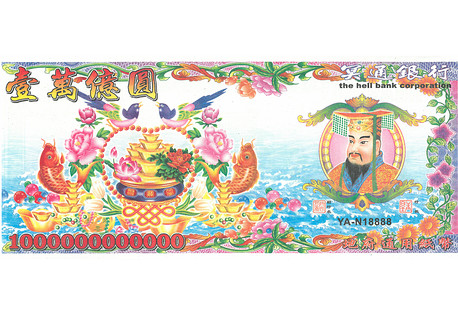 Traditionally, paper money burned in China came in small denominations of fives or tens. But more recent generations of money printers have grown less restrained. The value of the biggest bills has risen in the past few decades from the millions and, more recently, the billions. The reason: Even Hong Kong’s dead try to keep up with the Joneses, and their living relatives believe that they need more and more fake bucks to pay for high-cost indulgences like condos and iPads.

This year, on the narrow Hong Kong streets that are filled with shops that specialize in offerings for the dead, there appeared a foot-long, rainbow-colored $1 trillion bill. “What we have right now is hyperinflation,” says University of Hong Kong economist Timothy Hau. “It’s like operating in Zimbabwe.”

Click through for video and to see the trillion dollar bill (issued by “the hell bank corporation”), and read Louisa Lim’s recent NPR report on one of China’s top professional mourners and news on inflation among the living via CDT.