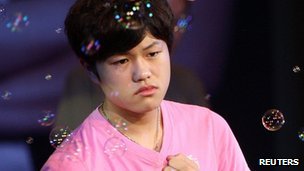 Li Tianyi, teenage son of PLA general and singer Li Shuangjiang and prominent member of China’s “rich second generation,” was arrested in February for involvement in a gang rape. His trial began yesterday in Beijing. Reuters provides background on Li Tianyi, his elite family, and the charges levied against him:

The teenage son of a prominent Chinese general goes on trial on Wednesday suspected of involvement in a gang rape in a case that has inflamed public anger at the offspring of the political elite who are widely seen as spoilt and reckless.

Li Tianyi, 17, is among five men accused of sexually assaulting a woman in a Beijing hotel in February, according to state media.

His father is General Li Shuangjiang of the People’s Liberation Army (PLA), who is a singer known for performing patriotic songs on television shows and at official events.

Li’s mother, Meng Ge, is a famous singer in the PLA. [Source]

In July, Li’s lawyers revealed that the young man would be pleading not guilty since the victim was a bar hostess. Public anger flared when Tsinghua professor Yi Yanyou posted a message on Weibo sympathizing with Li’s lawyers. The high-profile professor was reluctant, but eventually offered a public apology. In court today, Li denied having sexual relations with the victim, and claimed she was a prostitute. BBC reports:

The son of a high-profile Chinese army general has denied rape, in a case that has caused public outrage.

[…]Beijing newspapers said he denied any sexual relations with the woman, who he alleged was working as a prostitute.

Reports said she was not at the hearing because she is in hospital suffering from stress. [Source]

The South China Morning Post has more on Li’s denial of the charge, quoting a law professor on the significance of the  victim’s profession:

The Beijing Evening News reported that Li, as well as pleading not guilty, denied beating up the woman or having sex with her because he fell asleep in the hotel. However, another suspect told the court that Li did attack the woman before they entered the hotel and she was kicked by a third suspect.

Xu Lanting, a criminal law professor in Beijing, said the public would gain little insight into the conflicting claims until the verdict was announced.

“But a verdict will have little to do with whether the woman was available for paid sex, but would depend on whether she was coerced into having sex with the suspects,” Xu said. He said that under Chinese law victims can choose whether to attend a court hearing to protect themselves from publicity. [Source]

Despite calls for a public trial by Li’s mother, the trial is being heard privately since the case involves juveniles. In 2011, Li Tianyi was arrested for assaulting an elderly couple while illegally driving a BMW—a case that also prompted public outrage.