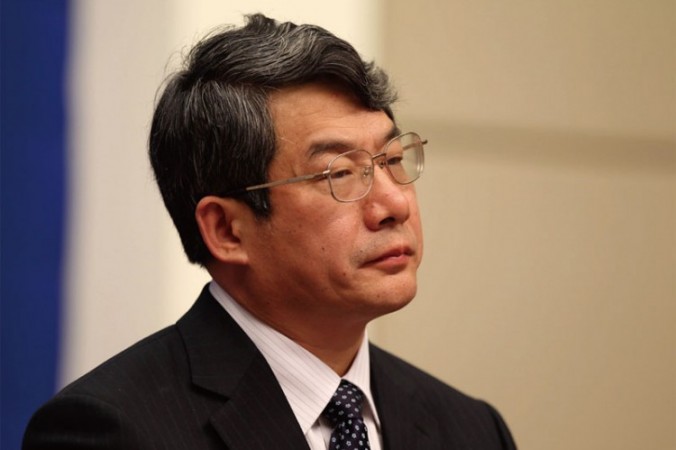 “Liu Tienan took advantage of his position to seek profits for others, and both Liu and his family accepted a huge amount of bribes,” the official Xinhua news agency reported, citing a statement from the party’s graft-fighting watchdog, the Central Commission for Discipline Inspection.

Liu was also “morally degenerate”, Xinhua said in a brief report, without providing other details of the accusations.

He had been handed over to the judicial authorities, Xinhua added, who will formally charge him and take his case to court. [Source]

Global Times reported that Liu is accused of “holding $17.45 million in 25 bank accounts, as well as 9 kilograms of gold and 25 ‘rare diamonds.'”

On entries posted on his microblog, Mr Luo said the official was involved in questionable financial deals, fabricated his academic record and threatened to kill a former mistress.

The downfall of Mr Liu is now being seen as rare victory for public efforts to expose official corruption, the BBC’s Martin Patience in Beijing reports.

However the reality is that the Chinese authorities still tightly control the internet, and any serious allegations against senior leaders are immediately censored unless they have been officially sanctioned, our correspondent adds.
[Source]

In a series of recent cases, investigative journalists have taken to weibo to post reports of corruption. The official Global Times acknowledged the role of the Internet in cracking Liu’s case:

The public scrutiny boosted by the Internet has been showing its power. The authorities have been responding quicker and harsher than before. A joint campaign to fight corruption is surging.

It may be a hard choice for rising officials. They know it is dangerous to trade their power for wealth. But in the meantime, it is hard for them not to think of “taking a share” while working hard for local or national prosperity.

However, the huge amount of money Liu has pocketed had nothing to do with improving his lifestyle. He had to hide it, so it served only as a time bomb. For some, money brings material goods or a sense of security. For others, it may bring a sense of power or honor. But Liu’s illegal gains brought him nothing but destruction. [Source]

Yet this “joint campaign” between netizens and the government, lauded by the Global Times, is, in fact, faltering. A number of activists who have pledged to help the government root out corruption, have been detained, including lawyer Xu Zhiyong. Bao Tong, the highest official to be jailed after the June 4th crackdown in 1989, recently spoke out about the disconnect between Xi’s words and actions in the fight against corruption. From Reuters:

But Xi’s stability obsessed government has also detained at least 16 activists after they demanded officials disclose their wealth.

“I think this means he does not want to fight corruption,” Bao said of Xi. “Such anti-corruption efforts are just for looking good, for fooling the ordinary people.”

“If he really wants to fight corruption, why doesn’t he dare disclose the assets of officials? Why does he want to arrest citizens who are requesting officials to disclose their assets?”

[…] “That is, he’s not prepared to solve the problems in China. All he wants to do is put on some make-up. He does not want to treat the sickness, have surgery or take medicine.” [Source]