Guangdong Propaganda Department News Service Notice: (1) Regarding the incident of abnormal trading by Everbright Securities, the media are asked to report objectively in accordance with information issued by authoritative bodies. Do not hype. (2) Today’s “Zhang Tai” commercial advertisement in the Southern Metropolis Daily violates the stipulations of advertising law. The media are asked to strengthen revision of the contents of advertisements. Do not publish this type of advertisement. Do not report or comment on this incident. (August 20, 2013)

On Tuesday, a trader at Everbright Securities accidentally sold 10 million government bonds far below market value, costing the company about 120,000 yuan (about USD 19,606). 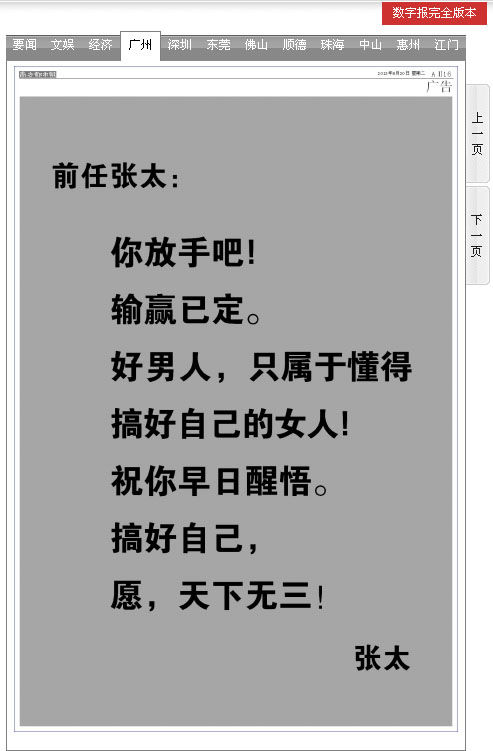 Former Zhang Tai: Give it up! The winner and loser have already been decided. Only a man who does right by his woman is a good man! I hope you wake up soon. Take care of yourself. I wish for a world without thirds! Zhang Tai

Netizens quickly shared this ad on Weibo, shocked that a mistress would make such a public statement. “Former Zhang Tai” (前任张太) can also be read as “ex Mrs. Zhang”–readers assumed that a Mr. Zhang had left his first wife to marry his mistress. The wish for “a world without thirds” (天下无三) plays on the title of the film A World Without Thieves (天下无贼). Mistresses are known as “little thirds” (小三).

The paper issued an apology [zh] yesterday, explaining that the ad was actually the first in a series by the cosmetics company Hänhoo, which later reveals that the “former Zhang Tai” is the same fictional person as the current “Zhang Tai.”