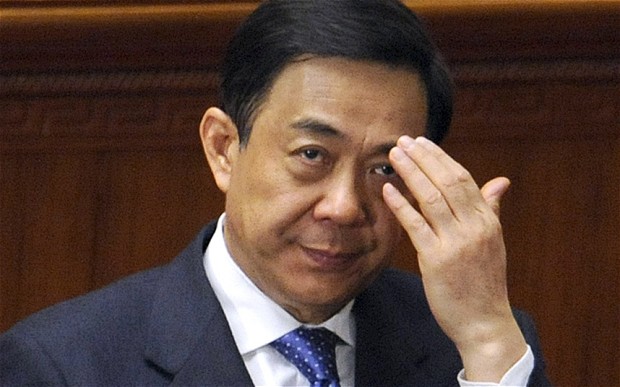 For The Telegraph, Malcolm Moore reports that the Chinese government is nervous about the upcoming trial of disgraced former Chongqing party chief Bo Xilai and has clamped down on both supporters and critics:

Wang Zheng, a Beijing teacher who wrote an open letter of support for Mr Bo, said she was unable to meet journalists because “the police are sitting next to me”.

Ma Jiming, another of Mr Bo’s supporters, wrote a plaintive tweet on Sina Weibo, China’s version of Twitter, on August 8.

“My account has been closed. This is the new one. I want you to know I am safe. Currently I cannot use this Weibo. I guess you all know the reason why. I get very angry when I hear that anyone who supports him [Bo] gets in trouble. No matter whether we share the same ground, if it is for him, may God bless you.”

Song Yangbiao, a prominent journalist and supporter of Mr Bo, was arrested on August 5 by police in Beijing. One of his friends, who visited him recently, said Mr Song was arrested for an internet post in support of the fallen politician. [Source]

Meanwhile, sources told The Wall Street Journal’s Jeremy Page that Bo has insisted that his wife only be allowed to testify against him in written form rather than in person:

Since Ms. Gu’s trial it had been expected that information she provided might be used against Mr. Bo. State media said after her own conviction that the court had taken into account her help in providing information about other people’s crimes. But it wasn’t apparent until recently what the charges against him would be or how crucial a role her testimony might play.

“She will provide evidence–that can’t be avoided–but the question is in what way,” said one person familiar with the Bo family. “If she appears in court, who knows what could happen.”

Chinese lawyers say that according to Chinese law, Ms. Gu cannot be forced by the court to testify against her husband, but they say she might choose to do so—in person or via a written statement—in exchange for guarantees of protection for their son, Bo Guagua, and other concessions from Chinese authorities. However, that could also expose her to further charges if she admits complicity in corruption. [Source]

Page also reported that members of the Bo and Gu families have disagreed on how the case should be handled, and one of the sources familiar with the discussions added that Bo “thinks he’s not guilty.”