The Other China Boom 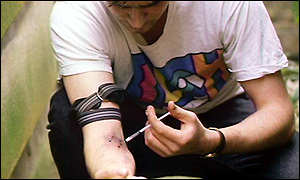 Australia’s ABC News’ Foreign Correspondent show has produced an investigative report looking at a growing stream of illicit drugs passing over the border from Myanmar through China and onto Western countries including Australia:

As Foreign Correspondent returns for another season in 2013, China correspondent Stephen McDonell takes us right into the heart of the tearaway trade, on patrol with China’s drug police struggling against the tide of illicit drugs often carried by poor Myanmar mules prepared to risk everything for a couple of hundred dollars.

McDonell and cameraman Wayne McAllister slip across the porous border to observe the trade from its source, head into newly-afflicted communities where heroin and amphetamine use is metastasising and then head to the super-cities like Shanghai where, unlike previous generations, China’s partying young are driving a booming market in so-called recreational drugs.

One credible report estimates the number of registered drug addicts has grown from 70,000 in 1990 to nearly 2 million a year or so ago. The number of regular drug users may be as high as 12 million. It’s a massive new market for the drug dealers of Myanmar and beyond and if it continues to grow exponentially, it’s a social, health and legal time bomb for Chinese authorities. [Source]