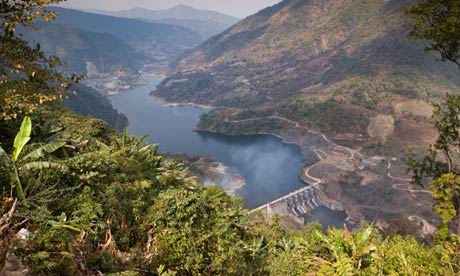 Amid a race to secure hydropower resources, The Guardian’s John Vidal writes that China and India’s plans to speed up the construction of dams in the Himalayas could have serious environmental consequences:

Most of the Himalayan rivers have been relatively untouched by dams near their sources. Now the two great Asian powers, India and China, are rushing to harness them as they cut through some of the world’s deepest valleys. Many of the proposed dams would be among the tallest in the world, able to generate more than 4,000MW, as much as the Hoover dam on the Colorado river in the US.

The result, over the next 20 years, “could be that the Himalayas become the most dammed region in the world”, said Ed Grumbine, visiting international scientist with the Chinese Academy of Sciences in Kunming. “India aims to construct 292 dams … doubling currenthydropower capacity and contributing 6% to projected national energyneeds. If all dams are constructed as proposed, in 28 of 32 major river valleys, the Indian Himalayas would have one of the highest average dam densities in the world, with one dam for every 32km of river channel. Every neighbour of India with undeveloped hydropower sites is building or planning to build multiple dams, totalling at minimum 129 projects,” said Grumbine, author of a paper in Science.

China, which is building multiple dams on all the major rivers running off the Tibetan plateau, is likely to emerge as the ultimate controller of water for nearly 40% of the world’s population. “The plateau is the source of the single largest collection of international rivers in the world, including the Mekong, the Brahmaputra, the Yangtse and the Yellow rivers. It is the headwater of rivers on which nearly half the world depends. The net effect of the dam building could be disastrous. We just don’t know the consequences,” said Tashi Tsering, a water resource researcher at the University of British Columbia in Canada. [Source]

On the brighter side, recent research suggests that the effects of glacial retreat on these rivers’ flow may be less severe than feared.