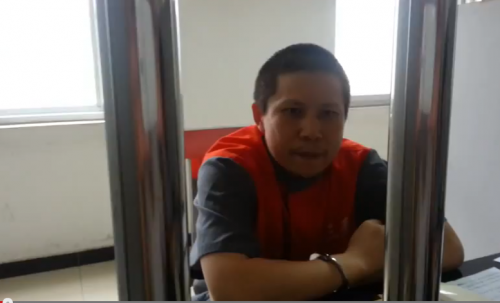 Lawyer and activist Xu Zhiyong has been formally arrested on charges of “assembling a crowd to disrupt order in a public place.” Xu was detained from his home in Beijing on July 16. The New York Times reports:

“For Xu Zhiyong, this means the prosecutors have approved the matter, that they believe there is sufficient evidence for the allegations to be further investigated,” Mr. Zhang [Qingfang, Xu’s lawyer] said in a telephone interview. “But that’s not a decision to prosecute. That could take months.”

Mr. Zhang declined to give details of the allegations against Mr. Xu, who was under informal house arrest for more than three months before his detention. A Beijing businessman who has campaigned for Mr. Xu’s release, Wang Gongquan, also confirmed that Mr. Xu had been formally arrested.

“As you move each step down the process — from detention to arrest and so on — the probability of it ending in conviction goes up dramatically,” said Joshua Rosenzweig, a researcher on human rights in China at the Chinese University of Hong Kong. “The chances are that Xu will face trial, and that makes it highly probable that he’ll be convicted.” [Source]

Duihua provides some background about the charges against Xu in the context of a broader crackdown on activists, which has seen more than 50 people detained, arrested or disappeared in recent months:

An internal notice issued by China’s Supreme People’s Procuratorate in June may be one impetus for this crackdown. The notice called on prosecutors (who also investigate corruption and approve arrests in criminal cases) to support the ongoing propaganda effort to “build a peaceful China” by paying special attention to certain types of criminal cases seen as particularly disruptive to political stability and social order. One thing this notice calls for is resoluteness in combatting criminal activity such as “illegal assembly and gathering a crowd to disrupt social order” where there is a “goal of subverting state power.” It is likely no coincidence, then, that the charges of illegal assembly and gathering a crowd to disrupt social order have been widely used against those detained in this latest crackdown. [Source]

Duihua also translates an article in Caijing by constitutional lawyer Zhang Qianfan expressing concerns about the notice and arguing that peaceful assembly should be protected under China’s constitution. Read more by and about Xu Zhiyong via CDT.