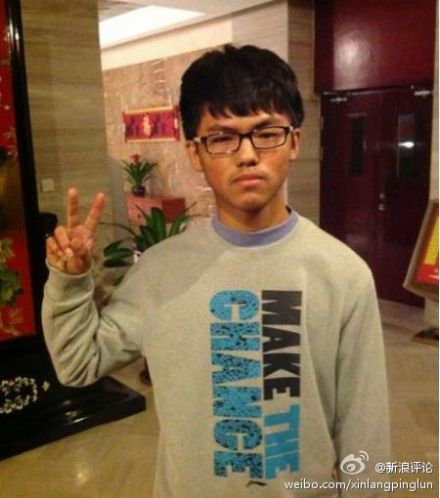 Monday saw the end of the week-long detention of Yang Zhong, a Gansu teenager accused of causing protests by challenging the official explanation for a local man’s death. Liberal microbloggers quickly rallied around Yang, and by Monday night appeared to have secured both his release and the suspension of the local police chief. From Andrew Jacobs at The New York Times:

On Monday, the police in Zhangjiachuan Hui Autonomous County apparently bowed to public pressure and released Yang Zhong, a middle school student who was among the first people to be charged under new regulations that criminalize the spreading of online rumors with up to three years in jail. [See more via CDT.] The authorities contend the boy had simply confessed to his crimes and served his punishment. Hours after his release, he posted online a photograph of himself flashing a victory sign. His shirt read, “Make the Change.”

Rights defenders and free-speech advocates have embraced his release as a small but significant victory against what many here see as a draconian campaign against dissent that has ensnared dozens of people over the past two months. Those arrested include Xu Zhiyong, a prominent lawyer who had called on officials to publicly disclose their financial assets, and Xue Manzi, a Chinese-American investor who often railed against injustice to his 12 million microblog followers. [Source]

But law lecturer Xu Xin cautioned that “even though this was a small victory, it’s by far not a victory of China’s Internet users, and even less a victory of the rule of law.” As if to underline the point, an attempted Q&A session on Sina Weibo was stifled before it got going:

Yang Hui's attempt at doing a Weibo interview shut down after 40 mins or so. His lawyer only answered one question

What kind of effect will the incident have on yr life? A: It has a big effect. It is v rare for someone to have this happen in his life.

Yang Hui's lawyer says he got a call from Sina telling him they were pulling the plug and saying they had been called by PSB.

A Global Times editorial reached a similar conclusion to Xu’s, though from a different direction:

The turn in Yang’s case is hailed as a “triumph” by some Internet activists against the judicial interpretation. But they have overestimated their so-called success.

[…] From Yang’s case, the government authorities should be more determined to improve their work, and the mainstream society should proceed with firmer confidence. The whole society should be able to observe Yang’s case in an objective and complete manner. [Source]

The editorial acknowledged, though, that the police had overreached. The newspaper’s Zhang Xiaobo had previously reported doubts about the case against Yang:

Local police in Zhangjiachuan said Friday that the distorted information posted by Yang led to a protest of hundreds of people on September 14, causing traffic jams and severely disturbing public order.

“No signs show a link between the protest and the posts,” Wang [Shihua, Yang’s lawyer] told the Global Times, adding that he hasn’t met Yang so far as the police is stalling a meeting.

[…] “Who is entitled to judge whether the information is rumor remains vague,” Pi Yijun, professor with the China University of Political Science and Law, told the Global Times, also questioning how police can be so sure that Yang fabricated the information, instead of just spreading it. [Source]

Despite the trial last month and sentencing on Sunday of fallen Chongqing Party chief Bo Xilai, the head of China’s legal history association labeled Yang’s “the defining legal case of the year” according to South China Morning Post’s Patrick Boehler. Boehler wrote that netizens, too, have focused more on Yang’s case than on Bo’s in recent days:

By Sunday, some of China’s most well-known lawyers, including Jiang Tianyong and Li Fangping, signed a statement calling for Yang’s release. “Public security departments should respect the guarantee of freedom of speech enshrined in the constitution and the fundamental principles of the Penal Code when dealing with speech crimes,” they wrote.

[…] Many weibo users meanwhile have resorted to sarcasm. “Secretary Liu is great, Director Bai is great!” many quipped in a frequently used tagline referring to the county’s Party Secretary Liu Changjiang and police chief Bai Yongjiang. “You have worked very hard,” micro-bloggers mocked.

[…] Others circulated a judgment in a graft case from earlier this year, according to which Bai curried favours with a superior with bribes amounting to 50,000 yuan, the equivalent of two decades of the average income of a local resident.

剿匪纵队: The adults heard gunshots and all got down; a clueless kid was shot.

陆军-反歧视: I finally understand what it means to “get them when they’re young.”

山行者weiworm: The new era of the Internet Cultural Revolution.

金鱼在看我: A classic “blanket crime,” the Crime of Counter-revolution version 2.0.

良良很蛋腚: Why don’t you arrest @HuXijin for the rumor-mongering on his Global Shit Times? This is nothing less than turning back history!

石屋山人8: If you think that under a fascist system you’re fine as long as you don’t commit a crime, you are mistaken.

If Yang’s release did not constitute a victory for his supporters, then police chief Bai’s suspension on Monday night might. From Chris Luo at South China Morning Post:

The announcement was published on Zhangjiachuan’s government website at around midnight last night.

“On advice of the disciplinary inspection commission, Zhangjiachuan’s standing committee has decided to suspended Bai Yongqiang as the chief of the Zhangjiachuan police bureau,” the brief statement read, without giving further details on what led to his downfall.

Disciplinary inspection commissions at all levels of the Communist Party’s structures serve mostly as anti-corruption organs. The emphasis of the commission’s influence in the decision to suspend Bai suggested a link to online allegations of his involvement in a corruption case. [Source]