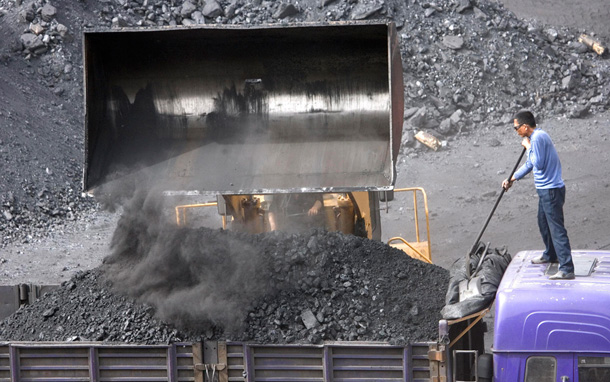 The Chinese government announced a new plan to improve air pollution by reducing coal consumption and emissions from factories while increasing the use of renewable energy sources. But some experts expressed concern over plan’s implementation. From Reuters:

China published the plan on its official website (www.gov.cn), also promising to boost nuclear power and natural gas use. Environmentalists welcomed the plan but were skeptical about its effective implementation.

“The coal consumption reduction targets for key industrial areas are a good sign they are taking air pollution and public health more seriously, but to make those targets happen, the action plan is a bit disappointing and there are loopholes,” said Huang Wei, a campaigner with Greenpeace in Beijing.

Beijing has struggled to get wayward provinces and industries to adhere to its anti-pollution measures and there were few concrete measures in the new plan to help strengthen its ability to monitor and punish those who violate the rules.

“We don’t see any fundamental structural changes, and this could be a potential risk in China’s efforts to meet targets to reduce PM 2.5,” said Huang, referring to China’s plan to cut a key indicator of air pollution by 25 percent in Beijing and surrounding provinces by 2017. [Source]

PM2.5 refers to particulate matter that measures smaller than 2.5 micrometers in diameter, and is the key indicator to measure air quality. According to the World Health Organization, the recommended level of PM2.5 is 20; in January, during a particularly polluted spell, the levels in Beijing reached 900. Bloomberg has more on efforts to reduce PM2.5:

Authorities aim to cut the concentration of PM2.5, the fine particles that pose the greatest health risk, by 25 percent in Beijing, Tianjin and surrounding Hebei province by 2017 from 2012 levels. They’ll seek to reduce concentrations by 20 percent in Shanghai and the Yangtze River delta and by 15 percent in southern China’s Pearl River delta, according to the plan.

These regions should also strive to reduce total coal usage, replacing it with electricity generated in other locations or with power produced from natural gas or non-fossil fuels, according to the plan.

Nationwide, China aims to cut the share of coal in total energy consumption to below 65 percent by 2017. Coal is now more than 70 percent, according to Tian Miao, an energy analyst at North Square Blue Oak, a London-based researcher. [Source]

But while the proportion of coal in total energy consumption will be reduced, the total amount of coal consumed will continue to rise. From ABC News:

The action plan from the State Council, China’s Cabinet, also aims to cut coal’s share of the country’s total primary energy use to below 65 percent by 2017 and increase the share of nuclear power, natural gas and renewable energy. According to Chinese government statistics, coal consumption accounted for 68.4 percent of total energy use in 2011.

New coal-fired power plants will be banned for new projects in the region surrounding Beijing, in the Yangtze Delta region near Shanghai and in the Pearl River Delta region of Guangdong province, the State Council said.

Martin Adams, Hong Kong-based energy editor for the Economist Intelligence Unit, said coal’s share of China’s energy consumption already was expected to fall below 65 percent by 2017 and that utility companies had noticed approvals for coal plants weren’t being given.

Adams also noted that while coal would account for a smaller proportion of total energy production, the absolute amount of coal burning would continue to increase. [Source]

As coal plants are moved away from the heavily-populated river deltas, they are being built in inland regions. These areas already suffer from water stress that will be exacerbated by the mining and processing of coal, which is heavily water-dependent. The Guardian reports that 60% of coal capacity will be centered in regions that account for 5% of China’s water supply:

Researchers at the World Resources Institute recently overlaid the locations of those proposed coal plants on its Aqueduct water stress maps for China. Of the proposed plants, 23% sit in areas where 40% to 80% of available water resources are already in demand from other users – areas known as facing “high water stress”. And 28% would be built in regions where other users compete for more than 80% of existing water supplies – areas deemed to be facing “extremely high water stress”.

New plants could potentially threaten water security for China’s farms, the country’s largest water user, as well as other industries and communities.

Six provinces in particular will feel the strain. About 60% of the total proposed coal capacity is planned for Inner Mongolia, Shaanxi, Gansu, Ningxia, Shanxi, and Hebei. Those provinces only contain 5% of China’s total water resources. And 60% of the proposed coal-fired power plants in those provinces are slated to be developed in areas of high or extremely high water stress. [Source]