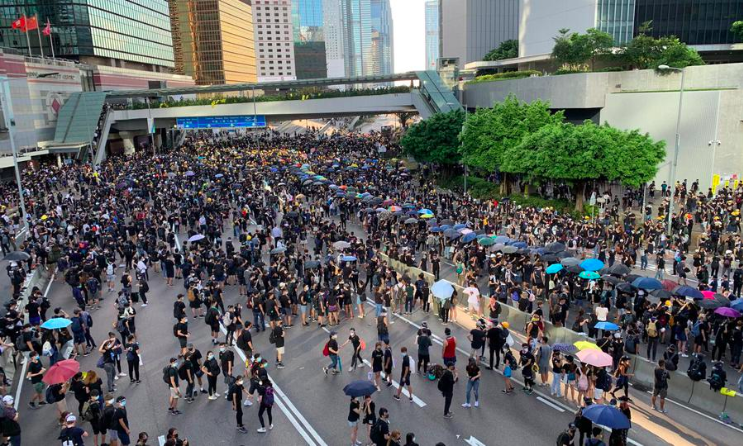 In an interview with the People’s Daily’s Xiakedao program last week, Zheng Yongnian, former director of the East Asian Institute at the National University of Singapore, joked about cutting off Hong Kong’s water supply to end protests in the city. The interview, originally titled “Conversation with Zheng Yongnian: how to bring the Hong Kong disturbance to a conclusion,” was chosen by government authorities to receive special promotion across online platforms. A media directive issued on August 18th ordered media organizations to promote the interview using push alerts using the description “People’s Daily interviews Zheng Yongnian: cutting off the water supply could end the chaos in Hong Kong.” A second directive two days later ordered the titled of the interview to be changed following a backlash over the language used. Zheng himself complained that his comments, translated below, had been misrepresented. 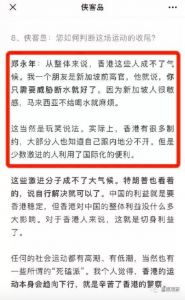 Xiakedao: How do you think the Hong Kong crisis will end?

Zheng Yongnian: On the whole, these people in Hong Kong won’t get very far. A friend of mine is a former senior official in Singapore. He said that you only need to threaten to cut off the water supply. Because Singaporeans are very sensitive, there will be a big problem if Malaysia stopped supplying drinking water.

This is of course a joke. In fact, Hong Kong has many constraints. Most people also know that they can’t separate themselves from the mainland. But a few radical people have taken advantage of the convenience of internationalization.

These radicals will not get very far. Trump has also been watching and said that it would be enough for this to solve own its own. China’s interest is to stabilize Hong Kong, but Hong Kong has little impact on China’s overall interests. For Hong Kong people, this is a matter of immediate interest.

Zheng subsequently issued a public statement condemning media outlets for misrepresenting his views by distorting the headline and taking his words out of context. 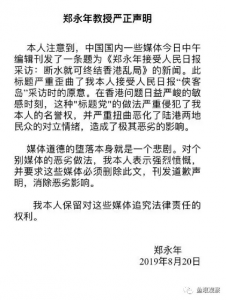 I have noticed that some media in China edited and published a news article at noon today titled “Zheng Yongnian Accepts Interview with People’s Daily: Cutting Off Water Supply Can End Hong Kong Chaos.” This title has seriously distorted my original intention in accepting the People’s Daily “Xiakedao” interview. At this sensitive time when the Hong Kong problem is getting worse by the day, this “headline clickbait” approach has seriously violated my reputation and seriously distorted and worsened the antagonism between the people in Hong Kong and the mainland, causing extremely bad influence.

The fall of media ethics is itself a tragedy. I personally express strong indignation at the bad practices of select media and ask these organizations to delete the article and issue an apology to eliminate the bad influence.

I personally reserve the right to pursue legal recourse against these media.

Zheng has nevertheless continued to attract criticism online. CDT has translated an article by author Gongminyuping, who wrote on WeChat that Zheng’s suggestion to cut off Hong Kong’s water supply is deeply inhumane and that the issue should not be treated as a lighthearted joke given the serious consequences that can arise from a water shortage in the city.

Professor Zheng Yongnian appeared to have been wronged. However, if you carefully read his interview with the media, it is true that he did not say that “cutting off water supply can end the chaos in Hong Kong,” but he did use the Singapore official to voice the idea of “threatening Hong Kong with water cut,” while regarding it as a lighthearted joke. This at least shows that he has no sense of guilt and aversion to the option of “threatening Hong Kong with water cut.”

This here is the crux of the problem.

I don’t know whether Professor Zheng has been kicked in the head. Do you not know what the consequences of “threatening Hong Kong with water cut” are? Hong Kong’s fresh water supply is almost entirely dependent on the mainland. Once it is interrupted, all of Hong Kong’s water supply will be cut off and the entire city will fall into chaos, leading to an unprecedented humanitarian crisis. This is by no means a solution to any dispute in a civilized society. I am afraid only terrorists would do such a thing. Yet Professor Zheng spoke of such a humanitarian crisis without hesitation, and treated it as a lighthearted “joke.” This is really spine-chilling.

The reason why humans are human is that at minimum they care about humanity. Universities are regarded as the hall of human civilization. As a university professor, laving aside how much one should know, one should at least be self-respecting and possess civilized thinking and temperament. Don’t let your words and actions defile the university and tarnish your profession. How could a university professor say such words about achieving so-called legitimate purposes by using unscrupulous means against his own compatriots? Calling it a “joke” simply confirms the cold-blooded attitude he has towards his compatriots.

Professor Deng is not the only person who has been kicked in the head. On Weibo, a group of netizens has cheered and expressed their anticipation for “threatening Hong Kong with water cut.” Some netizens even suggested that the Daya Bay nuclear power plant be shut down for maintenance, the Dongshen Water Supply Project pipeline be refurbished, and the Guangxi Fresh Vegetable Quarantine System be upgraded. In short, these people will not stop until the people of Hong Kong have nowhere to turn. It has the same logic as thinking “it is better to take back Taiwan even if it means that the island will be without grass.”

These people are said to be patriots. Yet they don’t even love their compatriots. I do not know what makes them deserve the title of patriot. Those who say such words, even if they are not terrorists, are obviously highly compatible with terrorists in terms of spiritual temperament and thinking habits.

Fortunately, we live in a civilized era. It is unlikely that anyone will use the terroristic tactic of “threatening Hong Kong with water cut.” But this incident has exposed some people’s anti-human thinking, which is still worthy of vigilance. These people include some elites, such as the Singaporean official and Zheng Yongnian. This also includes many grassroots individuals who are praising “threatening Hong Kong with water cut.” The existence of these people is not only stopping Hong Kong from getting back on the right track, but is also a potential threat to the stability of the entire country. These people can’t be underestimated! [Chinese]