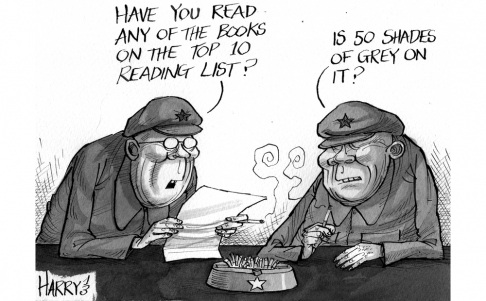 The State Organs Work Committee of CPC Central Committee ranked Thomas Friedman's bestseller, The World Is Flat, A Brief History of the Twenty-First Century (2005), as the number seven book on a top ten list; Friedman's book was the only foreign book to make the cut. Amy Li reports for The South China Morning Post:

The books voted to the top 10 list were chosen from among 103 titles, mostly non-fiction, recommended to party leaders and high government officials by the State Organs Work Committee over the past five years, a Beijing News report revealed on Thursday.The top 10 list is dominated by domestic authors discussing Chinese history, economics and politics. The only book by a foreign author to make the top 10 was American journalist and writer Thomas Friedman’s international bestseller The World Is Flat, A Brief History of the Twenty-First Century. Published in 2005, it was ranked seventh.The only other book among the top 10 not devoted to a China-related topic is the fifth-ranked The Rise and Fall of a Superpower by a group of Chinese authors. The book examines the history of the former Soviet Union and its collapse.[Source]

Meanwhile, Tania Branigan reports at The Guardian that Mao's Little Red Book, second in popularity only to The Bible, is coming out anew in a “partly red” version:

The new version is due for release in November, just before the 120th anniversary of Mao's birth. Its chief editor, Chen Yu – a senior colonel at the Academy of Military Science – describes it as a voluntary initiative. “We just want to edit the book, as other scholars work on the Analects of Confucius… We don't have a complicated political purpose,” said Chen.But Leese suggested it was a “trial balloon” from Maoist sympathisers: “If they hadn't seen how the general tone towards the Maoist heritage had changed, I don't think they would have dared. This is party internal politics popping up in the public sphere.”Chen said his team of 20 had worked for two years on the project, under pressure from left and right. The title may not include the word “quotations”, he said, and will be attributed to Mao Zedong instead of Chairman Mao because the former is more neutral.[Source]